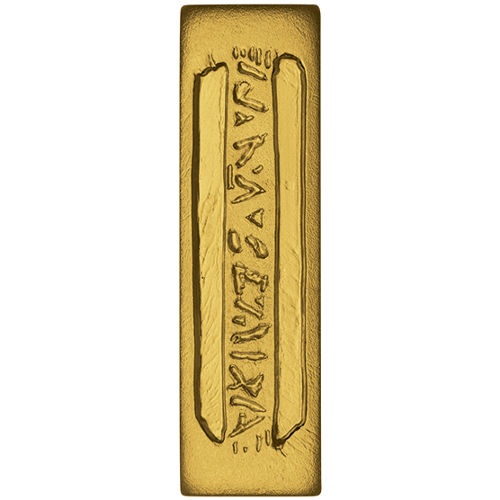 The Perth Mint made Trekies around the world happy last year with the limited release of silver proof coins honoring the 60th anniversary of Star Trek. Created by Gene Roddenberry, the science fiction concept grew over the decades to include more than 10 features films and five television series. An all-new product is available now in the form of the 2016 1 oz Star Trek Deep Space Nine Silver Latinum Gold-Plated bar, now listed on Silver.com.

The Ferengi Alliance was the civilization in Deep Space Nine that showed the greatest interest in latinum. To the Ferengi, the gold itself had little value. It was merely a means of transporting the more valuable latinum inside.

Now, the Perth Mint replicates the look of those latinum bars as a continuance of its popular Star Trek themed precious metals. The bar, though gold-plated and bearing the appearance of a gold bullion bar, actually contains .999 fine silver. In this way, gold is again rendered “useless” as a carrier for the valuable, pure silver of this bar.

On the reverse face of the bar you’ll find the latinum engravings that the Ferengi Alliance used on its bars in the show, along with a maker’s mark. Each 2016 1 oz Star Trek Deep Space Nine Silver Latinum Gold-Plated Bar here ships in a special wooden display case and arrives in Star Trek themed box, complete with a Certificate of Authenticity.

Australia’s Perth Mint was founded in 1898, and today is the oldest operating mint in Australia. Though it is not part of the sovereign Royal Australian Mint, its products do enjoy legal tender status under the Currency Act of 1965.

If you have any questions, please don’t hesitate to ask. Silver.com associates are available at 888-989-7223, or you can connect with us online using our live web chat and email services. If you are interested in similar products, check out our full selection of Perth Mint Star Trek Coins.