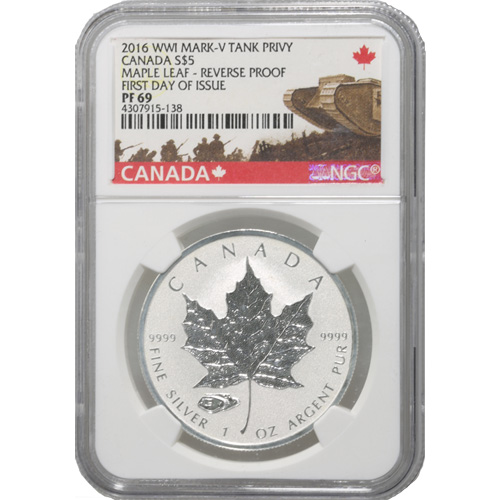 The 1 oz silver coins in the Silver Maple Leaf Series from the Royal Canadian Mint are traditionally offered in Brilliant Uncirculated condition each year. For collectors, there are also low-mintage versions of the Silver Maple Leaf with privy marks. In some cases, these coins even have distinctive finishes such as reverse proof visuals. Right now, 2016 1 oz Tank Privy Silver Canadian Maple Leaf Reverse Proof Coins in near-perfect condition are available to purchase online at Silver.com.

Each of the 2016 1 oz Tank Privy Silver Canadian Maple Leaf Reverse Proof Coins in this product listing comes with a near-perfect certification. Coins in PF69 condition exhibit full, original mint luster with a maximum of two minor detracting flaws. Acceptable flaws at this level include minuscule contact marks or hairlines and must be located outside of the primary focal points of the coin. The First Day of Issue label is assigned to coins that were received for grading within the first 24 hours following release by the Royal Canadian Mint.

The 2016 Tank Privy Silver Maple Leaf coins were released in 2016 to mark the 100th anniversary of the Mark V tank’s debut in World War I. In 1916, these lumbering beasts roared onto the battlefields of Europe as the United Kingdom looked the break the long stalemate of trench warfare in Europe with rolling, mechanized units. These coins are reverse proof specimens with mirrored design elements and frosted background fields.

The obverse side of the 2016 1 oz Tank Privy Silver Canadian Maple Leaf Coin includes the right-profile portrait of Queen Elizabeth II. This bust of the Queen was designed by Susanna Blunt in 2003 as the fourth-generation effigy for Canadian coins. It is just the second portrait from a Canadian artist and the first during the Queen’s reign without a crown.

If you have any questions about these coins, please don’t hesitate to ask. Silver.com customer service is available on the phone at 888-989-7223, on the web using our live chat, and via our email address.