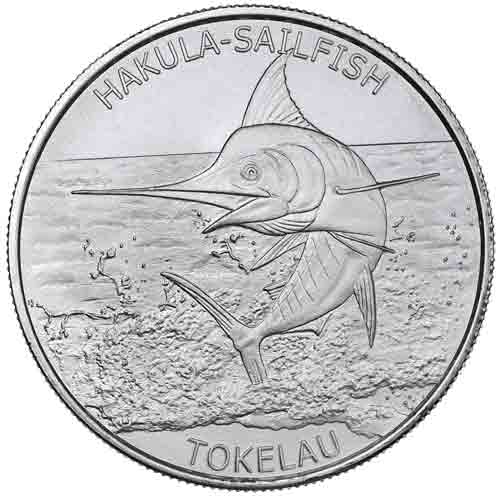 The South Pacific region of the world is producing some of the finest new coin designs in the precious metals market today. The Perth Mint in Australia and the privately-owned New Zealand Mint strike stunning coins each year, and those are now joined by the coins in the Tokelau Ocean Life Series. Today, the 2016 1 oz Silver Tokelau Sailfish coin is available from Silver.com.

In 2014, the government of Tokelau contracted with Treasures of Oz to create a 12-coin series celebrating Ocean Life in the South Pacific. Specifically, the series honors various fish species from the waters of the Pacific Ocean.

The 12-coin series launched in 2014 with the Yellowfin Tuna design, and was followed up in 2015 by a Great White Shark coin design. Each of the coins in the series, including these 2016 1 oz. Silver Tokelau Sailfish coins, features engravings of the animal species represented in both English and the local tongue.

On the reverse face of this coin you’ll find the image of a Sailfish, also known as the Hakula, as it leaps out of the water. Engravings identify the nation of issue and the animal represented in the design.

The obverse features a unique combination of Queen Elizabeth II and local culture. The Queen’s effigy is that which was created in 1998 by Ian Rank-Broadley. Below it you’ll notice the wooden tackle-box used in traditional fishing by the residents of Tokelau.

Treasures of Oz is a privately-owned mint that formed in 2008 in Perth, Western Australia. Like many other mints around the world, it produces silver and gold rounds, bullion bars, and bullion coins in minimal purities of .999 silver and .9999 gold.

If you have questions about these exciting new coins, please feel free to reach out to Silver.com with those inquiries. You can reach us on the phone at 888-989-7223, connect with us online using our live web chat, or send us your questions in writing via email. If you are interested in similar products, check out our full selection of Silver Coins.