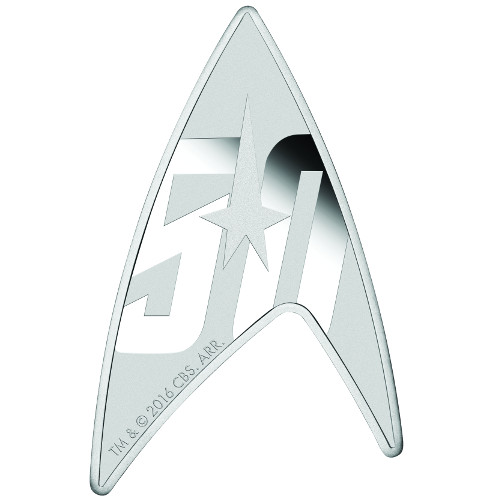 The year 2016 marks the 50th anniversary of Gene Roddenberry’s Star Trek universe. What started as a simple television series grew over the course of time to include an animated series, four subsequent television series, and a total of 13 feature films to date. Right now, the 2016 1 oz Silver Tuvalu Star Trek 50th Anniversary Delta Coin is available in Proof condition on Silver.com.

The Perth Mint has released countless proof, colorized coins throughout 2016 honoring the 50th anniversary of Star Trek. When Star Trek: The Original Series debuted on television, it was not an instant hit. In fact, after just three years on the air the series was cancelled.

However, as Star Trek went into syndication a cult following was born that carried the universe forward for years to come. The release of feature films in the 1970s and 1980s bridged the cap to a new generation of Trekkies, and the franchise expanded in the 1980s and 1990s to include more feature films and four additional series on TV.

On the obverse side of the Star Trek 50th Anniversary Delta Coin is the portrait of Queen Elizabeth II. This particular image is a fourth-generation depiction of Her Majesty created in 1998 by Ian Rank-Broadley.

The reverse of the 2016 1 oz Silver Tuvalu Star Trek 50th Anniversary Delta Coin includes a large “50” in the center to mark the historic anniversary of the science-fiction franchise. It includes engravings that identify the product as a copyrighted piece of Star Trek memorabilia.

Perth Mint is a state-owned facility in Western Australia. The mint was originally part of the British Royal Mint system. Opened in 1899, it is Australia’s oldest operating facility today and exists separate of the federal government’s Royal Australian Mint.