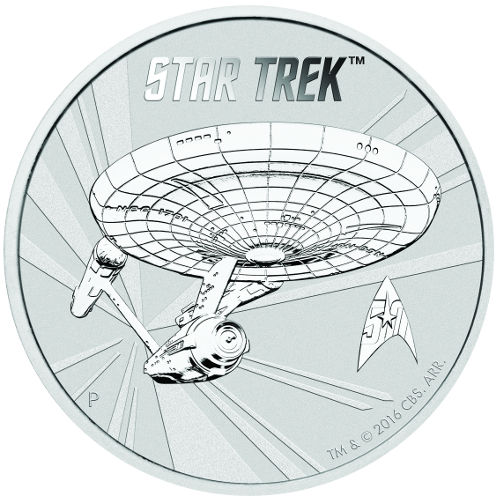 Star Trek made its debut on American television in 1966, making 2016 the 50th anniversary of one of the most widely acclaimed and beloved science-fiction franchises ever. Including five television series and more than a dozen feature films, Star Trek “boldly went where no man has gone before.” Silver.com now offers an all-new bullion coin with the release of the 2016 1 oz Silver Star Trek USS Enterprise NCC 1701 coin.

Over the course of the past 50 years, Gene Roddenberry’s Star Trek universe has expanded and captured a new generation of fans, growing from a cult classic TV series to a cultural phenomenon in the modern era. Though considered a science-fiction series, Star Trek has always explored societal themes through its series and films.

Among the many themes addressed by Star Trek over the years were Utopian societies, war, imperialism, racial equality, religion, human rights, and peace. The USS Enterprise NCC 1701 was the most famous starship in the fleet of the United Federation of Planets, and carried Captain James T. Kirk and his crew on their deep-space explorations.

The reverse side of each 2016 1 oz Silver Star Trek USS Enterprise NCC 1701 coin features the Enterprise as it hurtles through space. Engravings include the words “Star Trek,” a delta insignia with “50” inside to denote the 50th anniversary, and the “P” mint mark of the Perth Mint.

On the obverse of the coin is Queen Elizabeth II’s right-profile portrait from Ian Rank-Broadley. The fourth-generation depiction of Her Majesty, this 1998 image is surrounded by engravings of “Queen Elizabeth II,” “1 Dollar,” “Tuvalu,” “2016,” and “1 oz 999 Silver.”

Founded in 1899, Perth Mint is Australia’s oldest operating mint facility. Originally a part of the Royal Mint system, today it is a state-owned entity of Western Australia and operates separate of the Royal Australian Mint system. Its coins do enjoy legal tender status under the Currency Act of 1965.

If you have any questions, please don’t hesitate to ask. Silver.com customer service team members are available at 888-989-7223, online using our live web chat, and via our email address.