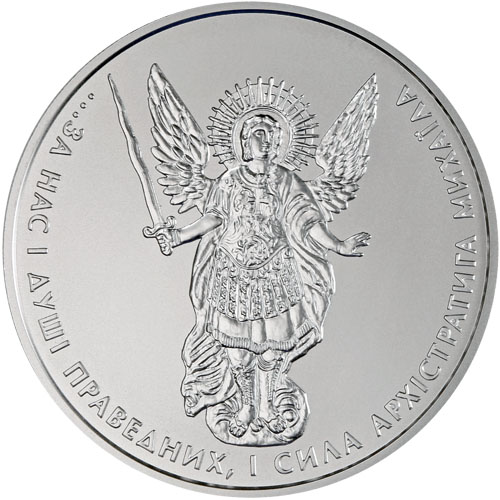 The Archangel Michael is known to the people of all the major religions of the world. Christians, Jews, and Islamists alike know him as a healer of the sick and the leader of God’s army. It is said that Michael led all the other angels in a defense of Heaven, defeating an enemy simultaneously referred to as a dragon, Satan, or the devil. He is also the face of the 2016 1 oz Silver Ukrainian Archangel Michael Coin, available today at Silver.com.

Continental Europe is home to some of the most intriguing coin programs available in the world right now, and a fair share of them with biblical background stories. The Archangel Michael coin series from the Ukraine debuted in 2011 with these 1 oz silver options, as well as two weights in gold.

In recent years, the National Bank of Ukraine has expanded the Ukrainian Gold Archangel Michael platform to include a ½ oz and these 1/10 oz coin. Debuting in 2012, these latter two fractional weights were initially quite popular. In recent years however, the ¼ oz has clawed its way back to the top as the most popular weight in the gold version.

The 2016 1 oz Silver Ukrainian Archangel Michael Coins in this listing are in BU condition. Coins in BU condition have no signs of wear and tear on the surfaces, though you may notice a range of minor flaws such as breaks in the luster, spotted surfaces, or contact marks from the production process at the mint.

On the obverse of the 2016 1 oz Silver Ukrainian Archangel Michael Coin is the image of Saint Michael. The archangel Michael has been depicted in many different ways throughout the course of Western civilization. Although the National Bank of Ukraine has opted for the image of Michael with a full suit of Roman armor and a sword with outstretched wings, another popular depiction is that of Michael standing above the dragon with sword and spear ready to slay the beast.

The reverse side of the Silver Ukrainian Archangel Michael Coin includes the national coat of arms for the country of Ukraine. This side includes engravings in Ukrainian, as does the other side of the coin from the National Bank of Ukraine.

We encourage Silver.com shoppers to reach out to us with any questions. You can reach our customer service team at 888-989-7223, connect with us online through our live chat, or simply send us an email with your inquiries.