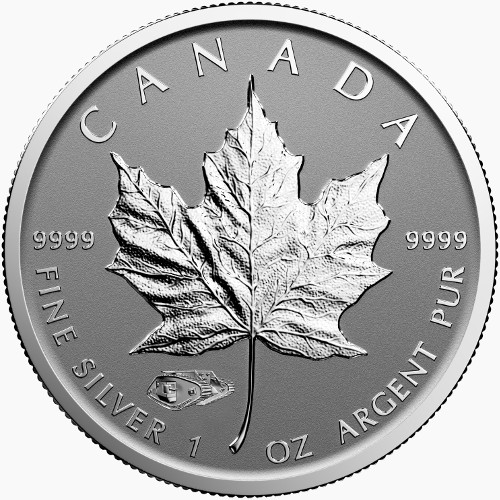 World War I was the first mechanized war in human history, and the effects of this new technology resulted in death and injury tolls on combatant nations reaching a total of more than 60 million. One of the most destructive new tools was the tank. Right now, the 2016 1 oz Tank Privy Silver Canadian Maple Leaf Reverse Proof Coin is available to purchase online at Silver.com.

The Mark V tank was one of the first rumbling mechanical beasts to hit the battlefields of Europe during World War I. The world’s first mechanized war, tanks played a relatively minor role in the conflict, but offered a precursor of things to come in World War II. The inclusion of a Mark V Tank Privy on these Silver Canadian Maple Leaf coins marks the 100th anniversary of their introduction into the Great War.

On the reverse of each coin you’ll find the image of the Sugar Maple Leaf used on the Silver Canadian Maple Leaf coins since their 1988 introduction. The Mark V Privy mark featured on these coins is a direct reflection of the actual tanks introduced by the British during World War I, and marks 100 years since the mechanic beasts roamed the battlefields of Europe.

The Mark V tank was first deployed in 1918 during the closing months of the war, and would feature in the Allied intervention in Russia’s Civil War between the White Russians (royal sympathizers) and the Red Army of the Soviets.

The obverse side of each of the Big Foot Privy Silver Canadian Maple Leaf coins features the right-profile portrait of Queen Elizabeth II. Her Majesty is on the obverse of all Canadian coinage and has been since 1952 when she ascended to the throne of the United Kingdom. This particular depiction was created in 2003 by Canadian artist Susanna Blunt.

Each of the 2016 1 oz Mark V Tank Privy Silver Canadian Maple Leaf Coins in this product listing reverse proof strikings. Coins with a reverse proof finish have a strong, frosted background field that is offset by the striking beauty of the deeply-mirrored, clear field of the design sets.

If you have any questions, please contact Silver.com at 888-989-7223. You can also chat with us live online, send us an email, or visit our website to view our full catalog of silver for sale.