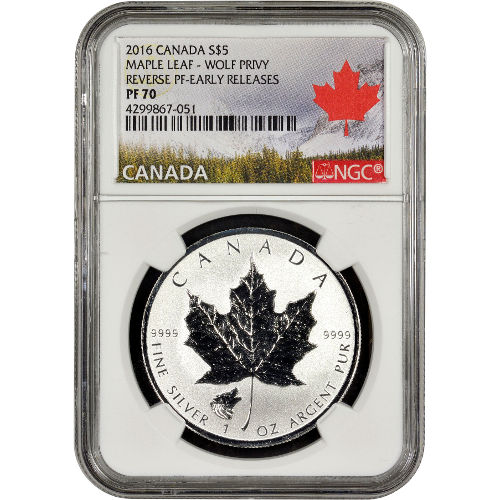 First up is the 2016 1 oz Wolf Privy Silver Canadian Maple Leaf, following in the order used in the Canadian Wildlife Series. Each of these coins is a perfect reverse proof coin with a PF70 grade from the NGC, indicating the existence of the full mint luster and a lack of any detracting flaws.

Reverse proof coins flip the concept of proof striking on its head. On these coins, the design set of the maple leaf and the privy mark feature a deeply-mirrored finish, while the background field is dominated by a strong, frosted finish. As Early Release coins, these products were packaged and shipped to an NGC depository within 30 days of release.

On the reverse face is the national emblem of Canada, the sugar maple leaf. Included along with the traditional engravings and security features, the coin also bears a small wolf privy mark that depicts a wolf howling into the air.

The obverse of the coin uses Canadian artist Susanna Blunt’s 2003 depiction of Queen Elizabeth II. Blunt’s portrait of Her Majesty features the Queen in right-profile relief, and includes engravings of “Elizabeth II,” “Five Dollars,” and “2016.”

If you have questions, Silver.com associates are ready to help. You can reach us at 888-989-7223, chat with us live online, or submit your questions via email.