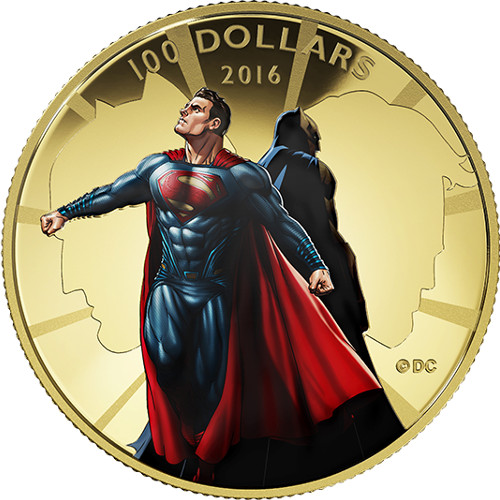 The only gold coin available from the Royal Canadian Mint’s new Batman v. Superman-themed coin series features images of the Man of Steel and the Dark Knight back to back, preparing themselves for the battle for the hearts and minds of mankind. Today, the 2016 Canadian 14-Karat Gold $100 Batman v. Superman: Dawn of Justice Coin is available while supplies last on Silver.com.

On the reverse face of the new 2016 14-karat Gold Batman v. Superman coin is the image of the two warring superheroes standing back to back. Superman is featured facing you, his head held high and looking to the sky. Batman is featured with his back to you, his face turned away.

The design uses colorization to bring life to the images of both superheroes, and in the background you can see the profile silhouettes of both men. In contrast to their bodies, the profile of their heads are swapped, with Batman’s face by Superman and vice versa.

The obverse features the right-profile portrait of Queen Elizabeth II. Created by Susanna Blunt in 2003, this design is commonly used on all Canadian coinage, and in this piece accompanied by engravings of Her Majesty’s name, the nation of issue, and “D.G. Regina.”

If you have questions, don’t hesitate to ask. Silver.com associates are available at 888-989-7223, online using our live web chat, and via email. If you are looking for similar products, check out our selection of Gold Canadian Coins.