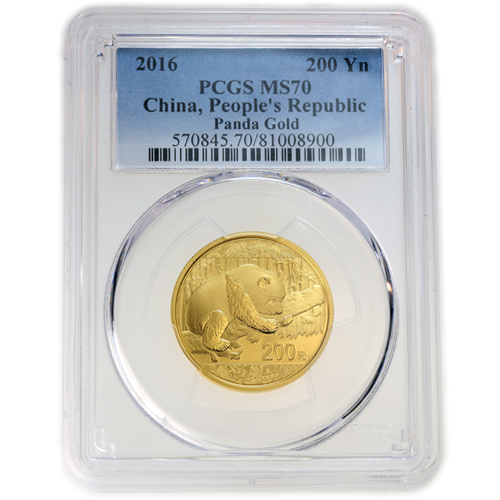 One of the world’s oldest continuous coin programs is out again in 2016, and this time there’s a change in the manner the coins are measured. Most bullion coins are measured in Troy ounces, but now the Chinese Mint will make the Chinese Panda coin series the first major bullion series measured in grams. Silver.com now offers the 2016 15 Gram Gold Chinese Panda Coin in perfect condition.

The Chinese Mint and People’s Bank of China announced a major change to its popular Chinese Panda series, impacting both the silver and gold versions of the coin. Rather than continuing the use of Troy ounce measurements for weight, the Chinese Mint will now weigh and mark all Chinese Panda coins in grams, a move the mint says brings the series in line with the metric system used by the nation.

On the obverse of every 2016 15 Gram Gold Chinese Panda coin you’ll find the image of a panda as it clings to the low-lying branch of a tree. The traditional bamboo wall is featured in the background of the design, with the engravings of the coin’s face value, weight, metal content, and purity also featured.

The reverse of all 2016 Gold Chinese Panda coins continues the use of the Temple of Heaven depiction. This has featured on the coins since 1982, and represents a social gathering place and house of worship located in south-central Beijing for more than 400 years.

Please direct your questions to a Silver.com associate at 888-989-7223, or connect with us online using our live web chat and email features.