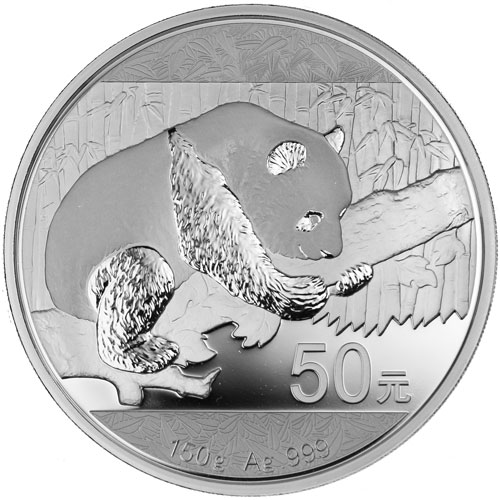 Introduced for the first time in 1983, the Silver Chinese Panda is the world’s oldest silver bullion and proof coin program in the world. The popular Silver American Eagle and Silver Canadian Maple Leaf both have shorter histories than China’s official silver coin, which bears the image of the nation’s unofficial emblem in a different relief each year on the obverse. Today, the 2016 150 Gram Proof Silver Chinese Panda Coin is available on Silver.com for purchase.

Chinese Panda coins are undergoing a massive period of transition in 2016. All coins in the series are no marked with weights and metal contents in Grams, rather than the traditionally-preferred Troy ounces. This meant no changes for the popular 1 Kilo coins in gold and silver, but several coins had weights adjusted as a result.

On top of that, the Chinese Mint introduced a total of two new coins entirely, both of which are gold and have a new size and denomination. An entirely new size was also introduced in the gold version with a 1 Gram coin.

On the obverse is the image of the panda as it climbs along a tree branch over a small pond. Engravings feature the Chinese symbol for panda, face value, and the coin’s weight, purity, and metal content.

The reverse still features the image of the Temple of Heaven, which has featured on the reverse of both gold and silver coins since the origins of the program in the early 1980s.

If you have any questions, please reach out to us at Silver.com using our phone number, 888-989-7223, online using our live web chat feature, or by submitting questions in writing via our email address.