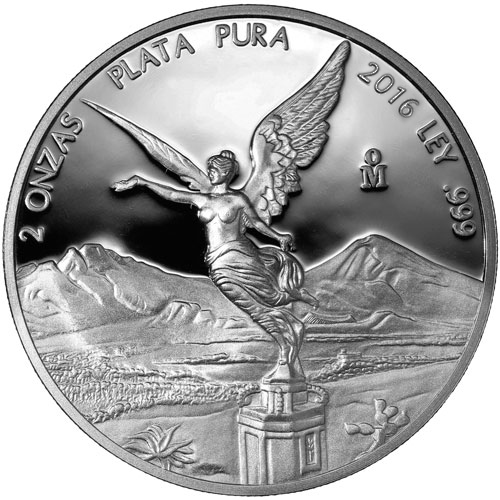 Silver Mexican Libertad coins were actually introduced in 1982 as bullion coins only, with the Proof Silver Libertad not unveiled until a year later in 1983. However, the production history was choppy at first for the proof version. There were no proof coins minted in 1984 or 1985, and just a 1 oz coin was available from 1986 until 1991.

In 1992, the Mexican Mint introduced four fractional weight Proof Silver Libertad coins, including the 1/20 oz Proof Silver Mexican Libertad. The 2 oz Silver Libertad has been available since 1996, when the program expanded to include a 2 oz and 5 oz option for collectors. The 2016 issue of the coin has the highest total mintage for 2 oz coins since their 1996 introduction.

The obverse face of all 2016 2 oz Proof Silver Mexican Libertad coins features numerous images from Mexican history. In the background you’ll notice two mountain peaks. Each one is a volcanic peak named after a pair of ancient Aztec lovers with a story not too different from that of Romeo and Juliet.

On the reverse side of the 2 oz Proof Silver Libertad you’ll find the modern coat of arms of Mexico in the center. Unlike the fractional-weight coins, these 1 oz Proofs have a circle surrounding them containing all 10 historic versions of the coat of arms dating back to the original from 1820.

Each 2016 2 oz Proof Silver Mexican Libertad Coin in this product listing from Silver.com is available to you in a protective capsule to ensure its beautiful finish is protected during shipping, and as a piece of your collection for years to come.

The Mexican Mint is located in Mexico City, Mexico. It is the oldest operating mint in the Western Hemisphere, having opened in 1535 under Spanish rule. Originally it struck coins for the Spanish Empire and its colonies throughout the Western world, from the Pacific Ocean to South America.

If you have questions, please feel free to contact Silver.com. Our customer service team is available at 888-989-7223, online using our live chat, and via our email address.