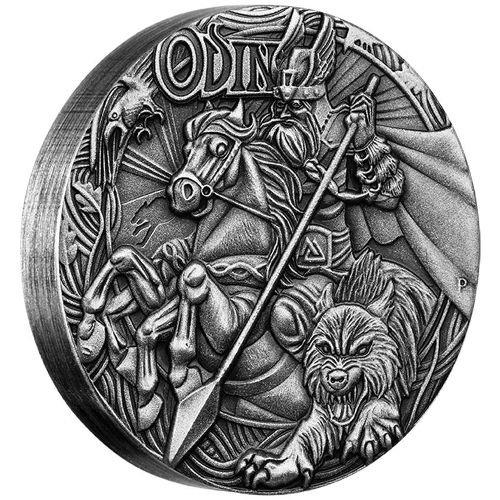 When it comes to gods, there’s no better position to be in than that of king. In Norse and Germanic mythology, Odin was the one known as the King of Gods and was seen as the preeminent force in mythology throughout central and northern Europe during ancient and medieval times. Right now the 2016 2 oz Silver Australian Norse Gods Odin Coin brings the god himself to life on a high-relief coin, available from Silver.com.

Odin is best known for his role in Norse mythology, but in fact he has deep roots in Germanic mythology as well. In both cultural mythologies he is known for his role as a fighter, but is also associated with healing, knowledge, poetry, and even the runic alphabet.

Each 2016 2 oz Silver Australian Norse God coin in this listing has a high-relief striking, giving a 3D appearance to the reverse design. Antique finishes add depth and subtle attraction to a coin’s design.

The reverse face of these high-relief coins features Odin as he is often depicted, in full battle armor on top of his horse Sleipnir with his trusted spear, Gungnir, in his hand. The lone engravings on this side include his name and the “P” mint mark of the Perth Mint.

On the obverse you’ll find the right-profile portrait of Her Majesty, Queen Elizabeth II. Created in 1998 by Ian Rank-Broadley, this fourth-generation depiction of the Queen continues as a popular feature on the obverse of all Australian and New Zealand coinage.

Perth Mint was founded in 1898 as the final of three British Royal Mint facilities. Following the closure of locations in Melbourne and Sydney, the Perth Mint remains as the oldest operating facility in the country.

If you have any questions about these exquisite new coins, please call Silver.com at 888-989-7223, chat with us live online, or email us directly.