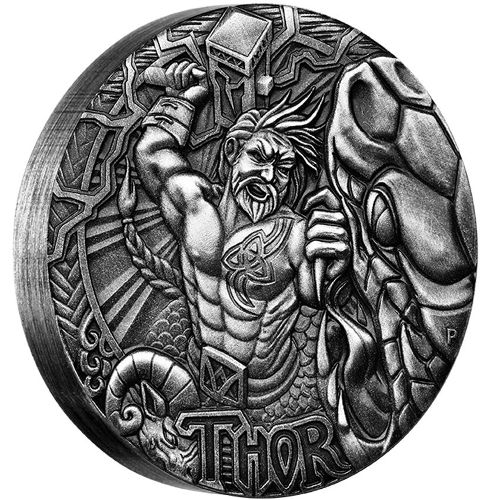 There is no Norse god that is more well-known or popular right now than Thor, the son of Odin and the God of Thunder. Thor has been depicted in numerous feature films from the Marvel universe, and even other recently released silver coins. Now, the 2016 2 oz Silver Australian Norse Gods Thor High Relief Coin is available for purchase on Silver.com.

The 2016 2 oz Silver Australian Norse Gods Thor High Relief Coins available to purchase on Silver.com today are truly unique products. First and foremost, each coin starts as a rimless blank, which combines with the antique finish to add age and visual appeal to the coins. The high-relief striking gives the image of Thor on the reverse a brilliant 3D appearance.

In Norse mythology, Thor is considered one of the most important gods. His father, Odin, is the father of the gods. Thor is associated with not just thunder, but lightning, storms, strength, oak trees, and the protection of mankind.

The reverse side of each coin features an image of Thor wielding his hammer as he does battle with the serpent known as Jormungand. Other intricacies of the detail include his belt, the design of a goat’s head in the lower left, and the word “Thor” along the bottom.

On the obverse is the traditional right-profile portrait of Queen Elizabeth II. This particular portrait of Her Majesty comes from Ian Rank-Broadley, and was created in 1998 as the fourth-generation depiction of the Queen to grace British and certain commonwealth coinage.

These 2016 2 oz Silver Australian Norse Gods Thor High Relief coins ship to you in a special square, wooden display case with engraved details honoring Thor. The box ships inside of a themed shipper with Thor’s image, the series name (Norse Gods), and includes a numbered Certificate of Authenticity.

Please feel free to contact Silver.com with any questions. You can reach us on the phone at 888-989-7223, online using our live web chat, or via our email address.