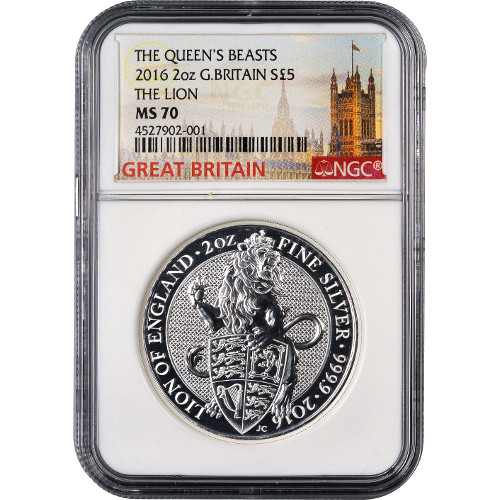 The Queen’s Beast Collection from the Royal Mint is an exciting 10-coin collection. It features different designs from sculptures that were in place around the Queen of England, Queen Elizabeth II, during her coronation ceremony in 1953. Right now, the 2016 2 oz Silver British Queen’s Beast Lion Coin is available to purchase online at Silver.com with a perfect certification.

Each of the 2016 2 oz Silver British Queen’s Beast Lion Coins in this listing is available to you in perfect condition according to the NGC. Coins with an MS70 grade exhibit full, original mint luster and lack all detracting flaws of any kind.

With the release of the Lion of England design, the Royal Mint embarked on an exciting new 10-coin series that expands its offering of bullion coins in both silver and gold. The series will feature new designs commemorating the 1953 coronation of Queen Elizabeth II at Westminster Abbey.

Jody Clark was tasked with recreating each of the 10 animal sculpture designs on the reverse face of the coins in this collection. In 2015, at just 33 years old, Clark became the youngest Royal Mint artist/engraver to develop a new effigy of Queen Elizabeth II for use on the obverse of British coinage. His fifth-generation depiction of Her Majesty appears on all Queen’s Beast Series coins.

The obverse of the 2016 2 oz Silver British Queen’s Beast Lion Coin includes the newest right-profile portrait of Queen Elizabeth II. This particular design replaces the 1998 effigy from Ian Rank-Broadley, and captures Her Majesty at the age of 89.

On the reverse of the coin is the Lion of England design feature. This image depicts the heraldic Lion of England standing on its hind legs with the official shield of Britain in front of it. Wearing a crown atop its head, one paw clutches the shield while the other is poised to strike.

If you have any questions, please don’t hesitate to contact Silver.com. Our customer service team is available to you on the phone at 888-989-7223, online using our live chat, and via our email address.