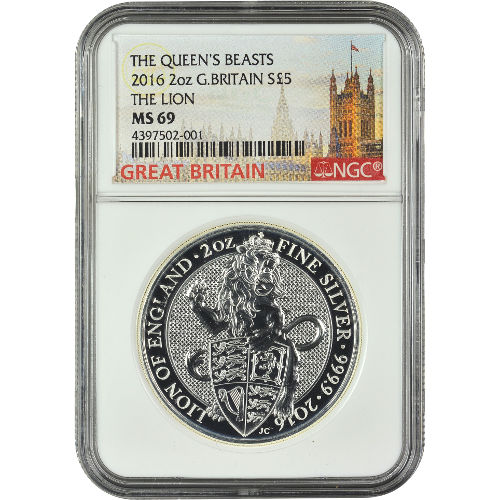 For the knights of the High Middle Ages in England, there was no creature more important and symbolic than the Barbary lion. Easily associated by these men with bravery, strength, and courage, the lion lives on today as one of the most important heraldic creatures in the Royal Coat of Arms for Britain and its Royal Family. The 2016 2 oz Silver British Queen’s Beast Lion Coin is available now on Silver.com in near-perfect condition.

Traditionally, the lion symbolizes a variety of traits and characteristics that mankind looks to emulate. Among them are bravery, nobility, strength, royal, stateliness, and valor. The lion is regarded as the king of beasts, which explains the close association with royal coat of arms from numerous nations.

For the people of Britain, the Barbary lion came into the coat of arms for the royal family during the reign of King Henry II. Throughout hundreds of years of British history, the lion remained in the official crest of the royal family and was often used as a nickname for the rulers of the Kingdom of England.

On the reverse of the 2016 2 oz Silver British Queen’s Beast Lion Coin is the Lion of England design, which incorporates the image of a lion standing behind the heraldic shield of the nation. This particular design is known as “lion rampant,” and features a lion standing on one or both hind legs, with its forepaws raised.

The obverse of the Silver British Queen’s Beast Lion coin depicts Queen Elizabeth II at 89 years of age, and is the most recent update to Her Majesty’s right-profile portrait on British coinage. Jody Clark of the Royal Mint designed both sides of the coin, and is the youngest man (at 33) to create a portrait of Her Majesty for British coins.

Each 2016 2 oz Silver British Queen’s Beast Lion Coin in this listing is a near-perfect specimen according to the NGC. Coins in this condition have full, original mint luster, but also include a maximum of two minor detracting flaws located outside the primary focal areas of the coin.

Please don’t hesitate to reach out to Silver.com if you have questions. You can reach us on the phone at 888-989-7223, or connect with us online using our live web chat and email options.