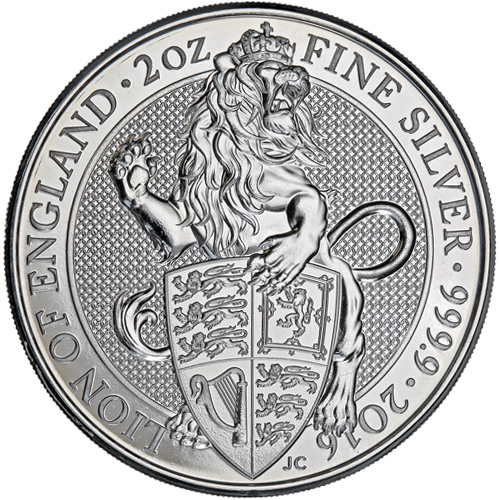 For the first time ever, the Royal Mint of London has authorized a series of 2 oz silver bullion coins for production. In this exciting new series, the Royal Mint will take investors and collectors through the history of heraldry in the United Kingdom, starting with the Lion. Today, Silver.com offers the 2016 2 oz Silver British Queen’s Beast Coins for purchase in BU condition.

The 2016 issue year from the Royal Mint is an exciting one for more than a few reasons. First and foremost, artist Jody Clark has created an all-new right-profile portrait of Her Majesty Queen Elizabeth II for use on British and commonwealth coinage. Currently, the 1998 depiction from Ian Rank-Broadley is in wide circulation.

Clark is also the lead designer on a series of Queen’s Beast coins that debuts with the release of the 2016 2 oz. Silver British Queen’s Beast Coin. At just 33 years of age when he designed the new portrait of the Queen, Clark is the youngest man to do so for the Royal Mint.

Eac 2016 2 oz Silver British Queen’s Beast coin in this listing has a Brilliant Uncirculated grade. Coins in BU condition show no signs of wear and tear, though you may notice minor imperfections such as spotted surfaces, contact marks, or breaks in the luster.

On the reverse of the coin is the image of the Lion, one of the most important heraldic creatures in British history. It is featured in front of the nation’s heraldic shield, with one paw raised and ready to strike, another clutching the shield, and standing upright on its hind paws.

The obverse of the 2016 2 oz Silver British Queen’s Beast Coin features the all-new design of Her Majesty’s portrait from Clark. Captured, as always, in right-profile relief, Her Majesty is visible along with engravings identifying the face value of the coin and the Queen’s name.

Located in the United Kingdom and originally founded as the London Mint during the 9th century, today the Royal Mint is one of the world’s oldest operating mints and is responsible for the production of British sovereign currency.

Please feel free to reach out to Silver.com with your questions. You can reach us on the phone at 888-989-7223, online using our live web chat, or via our email address. Check out our Silver British Coins page to see similar products.