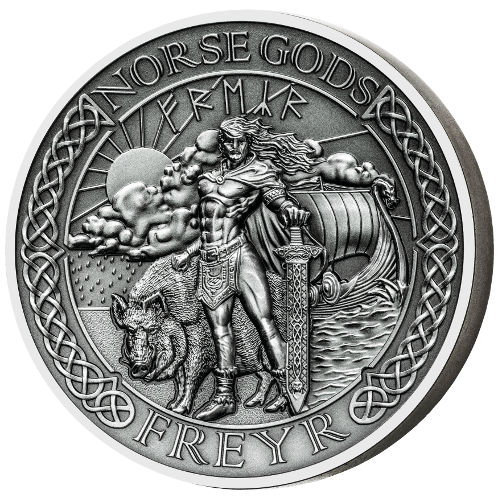 Norse mythology has taken a backseat for ages to Roman and Greek mythology, but the gods and goddesses of Asgard are gaining new attention thanks in part to some stunning ultra-high-relief proof coins from Germany’s BH Mayer Mint. Right now, the 2016 2 oz Silver Cook Islands Norse Gods Freyr Proof Coin is available from Silver.com.

Each 2016 2 oz Silver Cook Islands Norse Gods Freyr Proof coin has a beautiful finish and is struck as an ultra-high-relief coin. In order to achieve this appearance, the silver blanks are struck under intense pressure several times to create a 3D finish that makes the images seem as though they’re leaping off the coin.

The Silver Norse Gods series is a nine-coin series from the BH Mayer Mint that launched in 2015 with a Thor coin. Thor, son of Odin, has been the inspiration for several feature films that brought Norse mythology back into the mainstream. 2015 featured three subsequent releases in the program, and 2016 has five coins planned to round out the series.

On the obverse of the 2016 2 oz Silver Cook Islands Norse Gods Freyr Proof you’ll find the right-profile portrait of Queen Elizabeth II. Created by Ian Rank-Broadley as a fourth-generation image of Her Majesty, this particular design was created in 1998.

The reverse side of these ultra-high-relief proof coins bears the image of Freyr, the god of peace. Freyr is also known to rule over the weather, and in the design this is depicted with the elements of rain and sun. He was also known as the god of fertility who was responsible for watching over growth.

Located in Germany, the BH Mayer Mint is a private facility not associated with the national government. The family-owned facility is under fifth-generation management, and is synonymous with the history of the numismatic world.

If you have questions, don’t hesitate to contact Silver.com. Our associates are available on the phone at 888-989-7223, online using our live web chat, and via our email address.