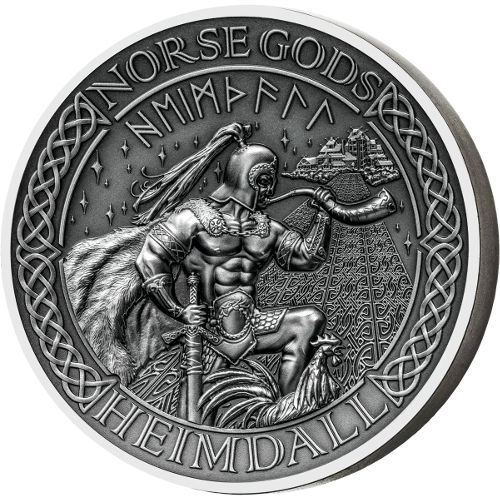 The nine-coin Silver Norse Gods series from the BH Mayer Mint of Germany restarts in 2016 with the release of the fifth coin in the series. This latest entry in the exciting ultra-high relief series features the god Heimdall, and bears a stunningly complex design that brings all facets of Heimdall’s reign to bare. The 2016 2 oz Silver Cook Islands Norse Gods Heimdall Proof Coin is available today on Silver.com.

The Silver Norse Gods Series of coins is a nine-coin program from the BH Mayer Mint that features a stunning ultra-high-relief proof striking. Each of the silver blanks is struck multiple times under immense pressure to create a design set that leaps off the surface of the coin and into your mind.

For the fifth release, the BH Mayer Mint highlights the god Heimdall. In Norse mythology, Heimdall was known as the keeper of heaven and the guardian of the rainbow bridge connecting the world of the gods to the world of men. Known as Bifrost, the bridge served as a connection between the gods’ Asgard and mankind’s Midgard.

On the reverse face of the 2016 2 oz Silver Cook Islands Norse Gods Heimdall Proof Coin you’ll find the image of the god Heimdall in the center, guarding the Bifrost bridge as it shoots off into the background between Asgard and Midgard.

The obverse face of the coin bears the right-profile portrait of Queen Elizabeth II, as created in 1998 by Ian Rank-Broadley. Her Majesty’s portrait is used on the obverse of all British and commonwealth coinage, and this particular design is the fourth-generation image of the Queen used since 1952.

The BH Mayer Mint is a privately-owned and operated minting facility in Germany. Founded in 1871, it remains in the hands of its original founding group under fifth-generation leadership, and has developed a record for excellence in the numismatic world.

Please feel free to contact Silver.com with any questions you might have about the Silver Norse Gods coins. You can reach us on the phone at 888-989-7223, online using our live chat, and via email.