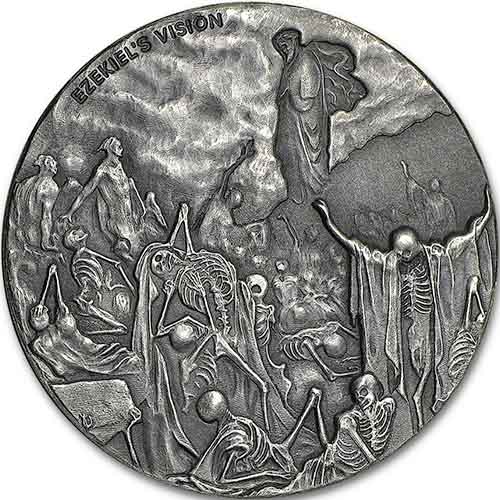 The Silver Biblical Coin Series from Scottsdale Mint is one of the most robust offerings from this private mint in its history. The coin series debuted in 2015 and features six new designs from each of the years of release to date. The 2016 2 oz Silver Ezekiel’s Vision of the Valley of Dry Bones Biblical Coin is available to you today online at Silver.com.

Representing the People of Israel in exile, the Valley of Dry Bones vision of Ezekiel is a haunting one in which he looks down upon a valley of what appear to be human bones scattered about. As he watches, those same bones become covered by tendon, tissue, flesh, and skin. Gold reveals to the prophet Ezekiel that the People of Israel should be resurrected and brought to the Land of Israel.

The Silver Biblical Coin series from Scottsdale debuted in 2015 with six unique designs and continues in 2016 with six more unique designs. The Valley of the Dry Bones is the fifth release of the 2016 schedule, and just as the coins before it, the imagery comes from original artwork by Gustave Dore.

On the reverse of the 2016 2 oz Silver Ezekiel’s Vision of the Valley of Dry Bones Biblical Coin includes the image of Ezekiel as he looks down through the clouds to see a valley full of bones. The design was from Dore, who created an illustration of the Bible collection of artworks that he completed in 1866.

The obverse of all the coins in this series features Queen Elizabeth II’s effigy. Her Majesty’s portrait on these coins comes from Raphael Maklouf, and represents the third-generation depiction of the Queen as monarch of England. Created in 1984, it was used on circulation coinage until 1997.

Each coin in the Silver Biblical Series is presented in a beautiful Bible-themed display box for your use and includes an individually numbered Certificate of Authenticity. The COA’s number matches the laser-engraved edge-lettering on each individual coin.

We encourage Silver.com customers to contact us with any questions. You can call us at 888-989-7223, or connect with us online via our live chat and email features. Don’t forget you can track spot silver prices throughout the right on our homepage!