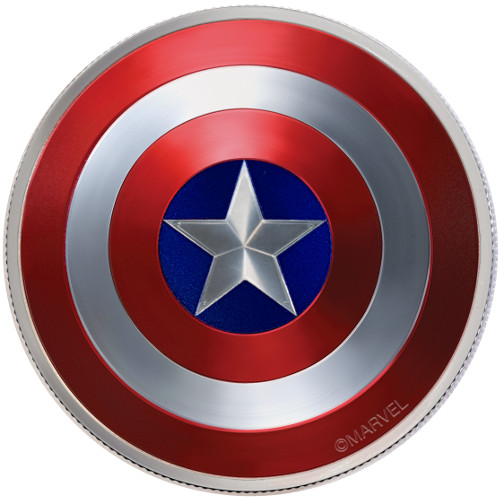 Steve Rogers was just a scrawny kid from Brooklyn living with his single mother during the Great Depression, his only friend another boy named Bucky. When the two opted to serve their country in the army, Rogers was deemed too weak to perform. Operation Rebirth changed all of that, giving him unbelievable strength and power to help defend freedom and democracy.

With the release of these 2016 2 oz Silver Fiji 75th Anniversary Captain America Shield Coins, Marvel Comics, the government of Fiji, and Sunshine Mint celebrate the 75th anniversary of Captain America’s debut. He first appeared on the pages of comics in 1941 when the world was at war on a global stage for the second time in a generation.

The reverse of all Captain America Shield Coins is the image of the coat of arms for Fiji. Engravings surrounding the design include “Fiji 2016” above, “2 oz” to the left, “.999 Fine Silver” to the right, and the face value of “2 Dollars” below the design field.

On the obverse side of every 2016 2 oz Silver Fiji 75th Anniversary Captain America Shield Coin is the colorized image of red and white strips, with a singular white star on a blue background in the very center. This side of the coin is convex and domed in shape, and replicates beautifully the shield of Captain America.

In this product listing here on Silver.com you have a limited chance to purchase a proof coin with a colorized finish. Each one includes a Certificate of Authenticity and arrives in a black display box, including color artwork of Captain America and a Captain America lapel pin.

Please don’t hesitate to reach out to Silver.com with any questions you might have regarding these products. You can contact our customer service team at 888-989-7223, connect with us online through our live chat, and via our email address.