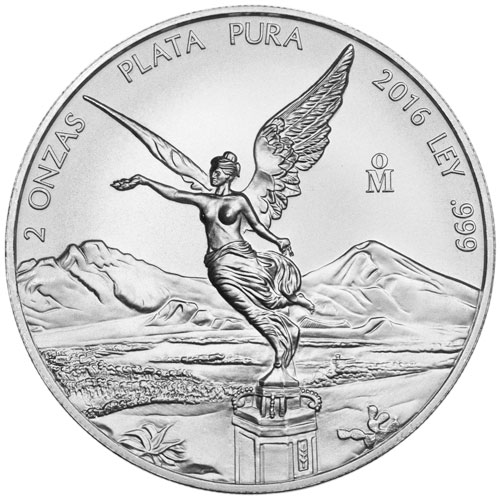 Each of the 2016 2 oz Silver Mexican Libertad Coins in this product listing has a Brilliant Uncirculated grade. Coins in BU condition exhibit no signs of wear and tear on the surfaces, but do feature minor detracting flaws such as breaks in the luster, spotted surfaces, or contact marks from striking.

The imagery on the Silver Mexican Libertad is deeply tied to the nation’s struggle for independence. In the center of Mexico City is the Mexican Independence Victory Column, topped by the statue of the goddess Victoria. She is the goddess of victory and holds in her left hand the broken chains of servitude.

Mexico’s coat of arms features a Mexican eagle grappling with a snaek from its perch on a cactus, which is symbolic of the country’s struggle to rid itself of Spanish rule. Both sides of the coin feature these historic images.

On the obverse of the 2016 2 oz Silver Mexican Libertad coin you’ll find the image of the goddess Victoria as she appears on the top of the independence column in Mexico City. Engravings identify the coin’s weight, metal content, and purity.

The reverse side of the coin features the nation’s coat of arms, which is encircled by 10 historic versions of the design used by the federal government since the nation’s independence in the 19th century. A lone engraving on this side reads “Estados Unidos Mexicanos.”

If you have any questions about the 2016 2 oz Silver Mexican Libertad, please feel free to contact Silver.com. Our customer service team is available at 888-989-7223, online using our live chat, and via email.