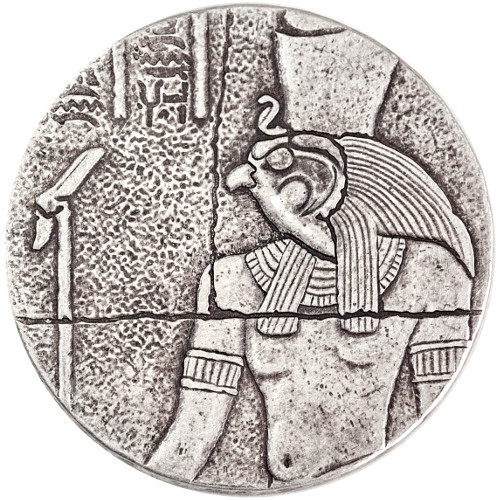 In Ancient Egypt, Horus was one of the most significant deities of the people, and was worshipped from the late prehistoric period of Egypt up until the Ptolemaic Kingdom and Roman conquest of Egypt. Horus took multiple forms overtime, but none as beautiful as that on the Egyptian Relic Series from Scottsdale Mint. Today, the 2016 2 oz Republic of Chad Silver Egyptian Relic Series Horus Coin is available online at Silver.com.

Horus took on many different forms in the recorded history of Egypt. It is believed that some of these various forms were different perceptions of the same multi-layered deity, viewed more as complementary to one another rather than opposing concepts or views of Horus. The most common depiction is that of a falcon or a man with a falcon’s head.

These 2016 2 oz Republic of Chad Silver Egyptian Relic Series Horus Coins feature a brilliant, rimless design that includes rotating lines on the edges of the coin that make it appear as though the coin was drilled straight out of a wall using a primitive drill. The design itself is antique in appearance and mimics the use of hieroglyphs commonly found throughout Egypt.

On the obverse of the 2016 2 oz Republic of Chad Silver Egyptian Relic Series Horus coin is the image of Horus in the common figure of a man with a falcon on his head. There are no other engravings on this face, only the appearance of a crack running horizontally and another vertically. These are purposely struck into the coin’s design for the appearance of age.

The reverse of all Egyptian Relic Series Horus coins includes the coat of arms for the Republic of Chad in the center. An engraving above reads “Republique du Tchad,” with the coin’s face value listed as “1000 Francs CFA” and the weight, purity, and metal content included as well.

All 2016 2 oz Republic of Chad Silver Egyptian Relic Series Horus Coins in this listing are in BU condition. Coins in BU condition show no signs of wear and tear, though you may notice minor flaws such as breaks in the luster, spotted surfaces, and contact marks.

Please direct your questions to a Silver.com associate at 888-989-7223, or feel free to reach out to us online through our live web chat and email features.