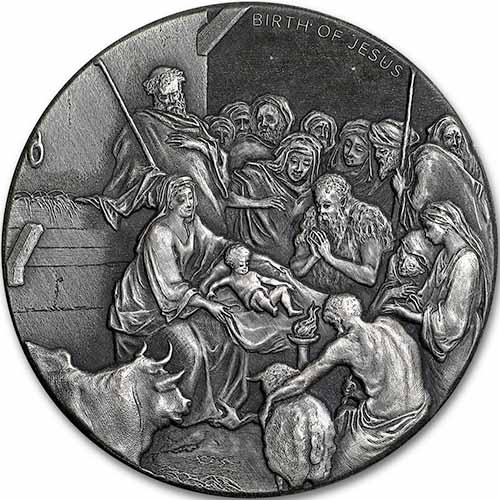 Every year on December 25th, Christians around the world celebrate the holiday known as Christmas. While the modern interpretation of this celebration is one involving Santa Claus and gifts, it is truly a time when Christians rejoice in the birth of their savior Jesus Christ. Right now, the 2016 2 oz Silver The Birth of Jesus Biblical Coin is available to purchase online at Silver.com.

Each 2016 2 oz Silver The Birth of Jesus Biblical Coin in this listing ships to you inside of a Bible-themed box for ideal display of your new silver bullion purchase. This includes a numbered Certificate of Authenticity that matches the serial number laser-engraved on the edge of each coin.

Jesus was born in a humble barn in the town of Bethlehem, on a date that today according to the Gregorian calendar fell on December 25th. Jesus’ father Joseph had returned to Bethlehem from the town of Nazareth with his bride Mary to be counted in a census, and there in Bethlehem Jesus was born.

On the reverse of all 2016 2 oz Silver The Birth of Jesus Biblical Coins features the image of Mary presenting Jesus in a tiny manger. A crowd is gathered around to see this “newborn king” as his father Joseph stands behind Mary.

The obverse of all coins in this collection includes the effigy of Queen Elizabeth II. Her Majesty has appeared on all British and commonwealth coinage since her ascension to the throne in 1952. This is the third-generation depiction of the Queen, created in 1984 by Raphael Maklouf and in circulation until 1997.

Scottsdale Mint is the production facility of the Silver Biblical Coin series. The coins debuted in 2015 with six design releases and continue into 2017 following the same schedule of design issues.

If you have any questions, please don’t hesitate to ask. Silver.com associates are available on the phone at 888-989-7223, on the web using our live chat service, or via our email address.