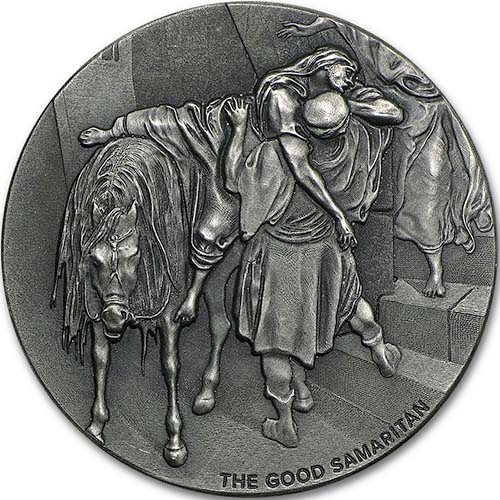 When people speak of a Good Samaritan, they are referring to an individual who thinks selflessly and is willing to step up and help someone else in need. This concept stems from a story in the Christian Bible, and is captured beautifully on the Scottsdale Mint’s Silver Biblical Coin Series, which debuted in 2015. Today, the 2016 2 oz Silver The Good Samaritan Biblical Coin is available to you online at Silver.com.

The parable of the Good Samaritan as captured in the gospel of Luke, 10:25-37, has inspired countless paintings, sculptures, satires, poems, and films in the last two thousand years. The interpretation of Luke’s story of a traveler helping another who has been beaten and stripped of his clothing has two interpretations.

Some scholars view the parable of the Good Samaritan as a story meant to teach us to show love and compassion for our fellow man. Other Christians interpret the parable allegorically, with the Samaritan representing Jesus Christ as he saves a sinful soul.

All Silver Biblical Coins from Scottsdale Mint are shipped inside of stunning Bible-themed display boxes that include a Certificate of Authenticity with purchase. The number on the COA matches the laser-engraved serial number found in the unique edge-lettering of these coins.

On the reverse of the 2016 2 oz Silver The Good Samaritan Biblical Coin you’ll find a depiction of an anonymous Good Samaritan helping the beaten and wounded traveler down from his donkey as he arrives at an inn. This depiction, like others in the series, comes from original artwork by French artist Gustave Dore.

The obverse of all Silver Biblical Coins includes an effigy of Queen Elizabeth II. Her Majesty is featured on the obverse of all British and commonwealth coinage, with this design coming from Raphael Maklouf in 1984. It represents the third-generation depiction of the Queen on the throne and was used through 1997.

Scottsdale Mint is a private minting operation in the state of Arizona, and it specializes in environmentally friendly refining operations and sourcing of its gold and silver.

Please feel free to reach out to Silver.com if you have questions on how to buy silver. You can call us at 888-989-7223, chat with us live online, or simply send us an email with your inquiries.