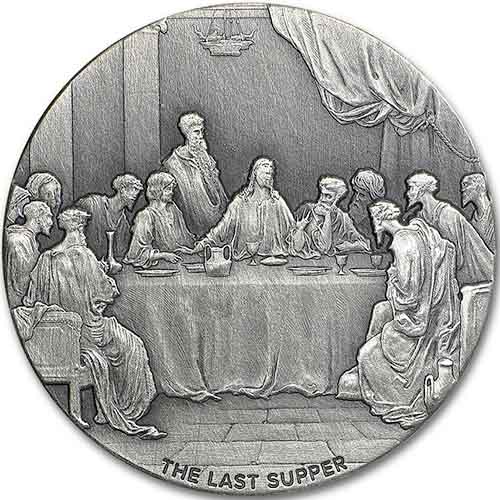 On the final night of his life, Jesus Christ sat down to a meal with his 12 disciples. At this meal he would prophesize that his closest followers would each betray him in the day to come, starting when peter denies knowing him the next morning. This moment has been captured in numerous paintings, and Gustave Dore’s depiction appears in Scottsdale Mint’s Biblical Series. Right now, the 2016 2 oz Silver The Last Supper Biblical Coin is available to purchase online at Silver.com.

Each 2016 2 oz Silver The Last Supper Biblical Coin ships to you inside of a Bible-themed display box created by the Scottsdale Mint. These boxes include a Certificate of Authenticity with the individual serial number of the coin inside. Each coin is a high-relief striking on a rimless blank, with individual serial numbers from 1 to 1,499 in the series laser-engraved on the edge.

When Christians take Holy Communion in church, they reenact the Last Supper. This event recounted in the gospel narratives tells of the final meal Jesus shared with his disciples in the city of Jerusalem before he was crucified. Four canonical gospels all tell of a Last Supper that occurs near the end of the week, with the First Epistle to the Corinthians bearing the earliest known mention of the meal.

The reverse of all 2016 2 oz Silver The Last Supper Biblical Coins includes Dore’s image of Jesus surrounded by the Apostles at a table. During this meal with his 12 closest disciples, Jesus tells each man that he will betray them before he dies.

On the obverse of Silver Biblical Series coins you’ll find the effigy of Queen Elizabeth II. Her Majesty appears in right-profile relief on the obverse of all British and commonwealth coinage, with this third-generation image created in 1984 by Jerusalem-born artist Raphael Maklouf.

Scottsdale Mint is a private refinery in the United States. The Scottsdale Mint prides itself on environmentally friendly refining procedures and precious metal sourcing. It produces its own branded items as well as various silver coin programs for foreign reserve banks.

If you have any questions, don’t hesitate to reach out to Silver.com. Our customer service team is available at 888-989-7223, online using our live chat, and via our email address.