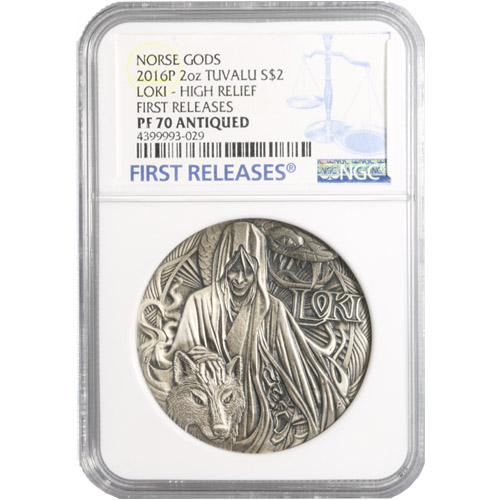 The Norse Gods Series was introduced by the Perth Mint in 2016. This series features the three primary deities of the old Norse mythology and religions, each one presented on a 2 oz rimless silver blank with a high-relief strike. Odin and Thor are well-known to fans of mythology around the world, but Loki has flown under the radar for some. Now, he’s center stage in the final release of the series on the 2016 2 oz Silver Tuvalu Norse Gods Loki High Relief coin available to you for purchase online in perfect condition at Silver.com.

Silver Norse Gods coins from the Perth Mint represented a three-coin series honoring the gods of Norse mythology. As important to the people of Scandinavia as the gods of Rome and Greece, the Norse gods rule with power similar to those of the gods of Roman and Greek mythology. Among them, Loki is the most mischievous of the gods.

A well-known shape-shifter, Loki is known as the God of Fire and the design used in this series reflects some of the common shapes he is known to take on. There are three masks within the design that represent the forms Loki takes on, but he is also flanked by two animals.

On the obverse of 2016 2 oz Silver Tuvalu Norse Gods Loki High Relief Coins, you will find an effigy of Queen Elizabeth II. This right-profile bust of the Queen was designed in 1998 by Ian Rank-Broadley and depicts the Queen with the Girls of Great Britain and Ireland Tiara. This tiara is rumored to be the Queen’s favorite piece of jewelry and was gifted to her grandmother, Mary of Teck, the former Queen of England upon her marriage to the Queen’s grandfather, King George V.

The reverse side of the 2016 Silver Tuvalu Norse Gods Loki High Reliefs is a depiction of the God of Fire. Loki is shown with a mischievous look on his face with wolf Fenrir and serpent Jormungand at this side.

These 2016 2 oz Silver Tuvalu Norse Gods Loki High Relief coins are in perfect condition. PF70 coins showcase full, original mint luster and have no detracting flaws of any kind present on the design elements or background fields. The included First Release label means the coins were received by the NGC within 30 days of release.

Silver.com customer service is available to assist you on the phone at 888-989-7223. We are also available on the web using our live chat and email address features.