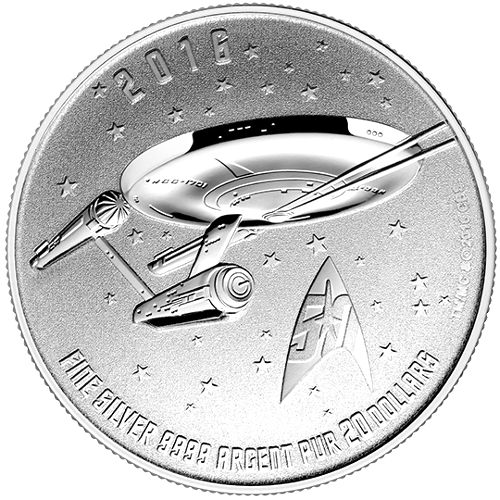 Across seven different television series and 13 feature films, the Star Trek universe has had just one constant feature: the U.S.S. Enterprise. First introduce in the Original Series from Gene Roddenberry, the Enterprise was the central starship in the Starfleet of the United Federation of Planets. Today, Silver.com offers the 2016 $20 Silver Canadian Star Trek Enterprise Coin for sale with a specimen finish.

The U.S.S. Enterprise was originally slated to be named Yorktown when Roddenberry was creating the series, but eventually he and art director Matt Jefferies went with Enterprise instead. The starship is given an official registry number of NCC-1701, with the prefix “NCC” actually serving as an international aircraft registration code.

Although the U.S.S. Enterprise was not featured in all Star Trek series, it was visible in The Original Series and all 13 feature films in the collection of Star Trek productions. 2016 marks the 50th anniversary of the creation of Star Trek.

The reverse face of each 2016 $20 Silver Canadian Star Trek Enterprise coin features the image of a the U.S.S. Enterprise soaring through the universe with its phaser blaster firing into the distance. Included in the design on this side is the Delta Shield Insignia made famous in The Original Series, with an internal engraving of “50” to mark the anniversary date in 2016.

On the obverse you’ll find the familiar right-profile portrait of England’s Queen Elizabeth II, created in 2003 by Susanna Blunt and used on the obverse of all Canadian currency and commemorative coinage.

Each of these Royal Canadian Mint products ships in a vinyl pouch to protect its unique specimen finish, and includes a certificate booklet to authenticate your purchase. The Royal Canadian Mint is the sovereign mint of Canada, and operates an original facility in Ottawa and a secondary location in Winnipeg.