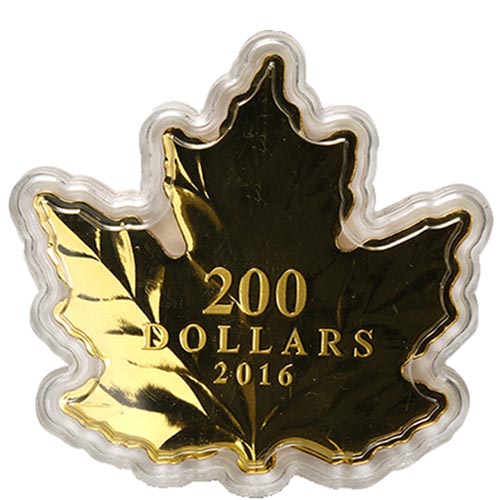 The gold for sale in the Royal Canadian Mint’s Gold Canadian Maple Leaf Series is well-known among investors and collectors. The annual bullion coin boasts 24-karat pure gold content and the same image of the sugar maple leaf that has been in use on the coins since 1979. What you have not seen before in this collection is anything like the 2016 Natures Purest Form version of the Gold Maple Leaf. Now, the 2016 $200 1 oz Gold Canadian Maple Leaf Nature’s Purest Form Coin is available to you for purchase online at Silver.com.

The sugar maple leaf is more than an icon of Canada, it is a well-known species of tree to millions around the world. In its natural form, the sugar maple leaf is native to hardwood forests and can be found in Canada predominantly in the eastern provinces from Nova Scotia west toward Quebec and into parts of Ontario and Manitoba. It is also common to the northern and northeastern United States from Minnesota across the Great Lakes Region to Massachusetts.

The obverse of these 2016 $200 1 oz Gold Canadian Maple Leaf Nature’s Purest Form Coins bears the right-profile bust of Queen Elizabeth II. In this 2003 design from Susanna Blunt, Her Majesty is depicted in the fourth-generation Canadian design with no crown on her head.

On the reverse of 2016 1 oz Gold Canadian Maple Leaf Nature’s Purest Form Coins are inscriptions of the date mark and the face value. The remainder of the coin bears only the visible form of a sugar maple leaf, complete with the individual striations of the leaf. These coins are proof specimens with frosted visuals and mirrored fields, and boast an impressive sugar maple-leaf shape.

These 2016 $200 1 oz Gold Canadian Maple Leaf Nature’s Purest Form Coins are available to purchase with a maple leaf-shaped capsule from the Royal Canadian Mint and the original capsule offered by the mint for packaging.

Silver.com customer service is available to answer your questions at 888-989-7223. You can also reach out to us live online through our chat service or send us an email.