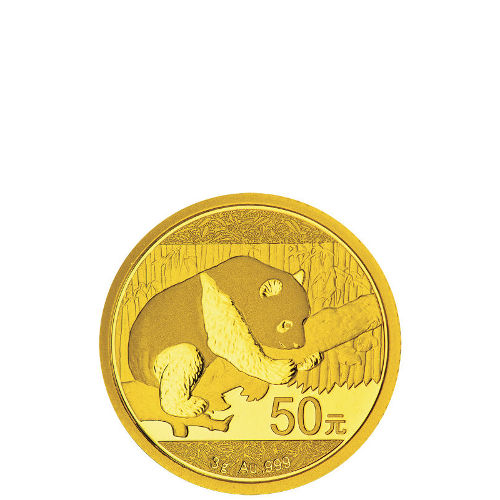 Chinese Panda coins are available in a diverse array of offerings as of 2016. The Chinese Mint strikes the coins in both gold and silver, with bullion and proof versions available. Gold Chinese Panda coins originated in 1982 with weights ranging from 1 oz down to 1/10 oz.

After one year of production the gold coin program expanded to include a 1/20 oz coin, with 5 oz and 12 oz coins phased in over the course of several years. As of 2016, the Chinese Mint is adopting weight marks on its coins listed in grams, rather than ounces. For 2016, the Gold Chinese Panda is available in 1, 3, 8, 15, and 30 Grams.

The obverse face of the Gold Chinese Panda features the latest depiction of the cuddly panda bear. An unofficial symbol of the People’s Republic of China, the panda is featured on this coin as it crawls along a fallen tree trunk. Inscriptions on this face include only the face value of the coin.

The Chinese Mint does not produce its Gold and Silver Chinese Panda coins with any mint marks, making it impossible to know which mints produced individual coins. Production is known to take place at facilities in Beijing, Shanghai, and Shenyang.

If you have questions, feel free to reach out to Silver.com customer service representatives. You can call us at 888-989-7223, chat with us live online, or submit your questions via email.