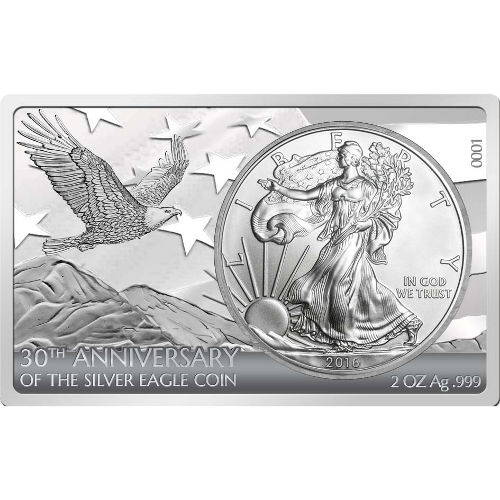 When the coin was introduced, the US Mint chose Adolph A. Weinman’s historic Walking Liberty design for the obverse face. Weinman’s design was created in 1916 and was part of a wide effort by the federal government to overhaul the design of all gold and silver coinage. Walking Liberty originally appeared on a half-dollar coin from 1916 to 1947.

US Mint Chief Engraver John Mercanti was tasked with developing a design for the reverse, and developed a modern heraldic eagle design. Featured on countless coins in American history, the heraldic eagle features an American bald eagle behind a shield. Mercanti’s version includes 13 stars above the eagle’s head as a symbol of the original American Colonies.

Silver.com encourages all customers to ask questions when they arise. If you have questions, don’t hesitate to reach out to us at 888-989-7223. You can also connect with us online using our website’s live web chat feature or by submitting your questions in an email. If you are looking for similar products, be sure to check out our full selection of American Silver Eagle Coin Sets.