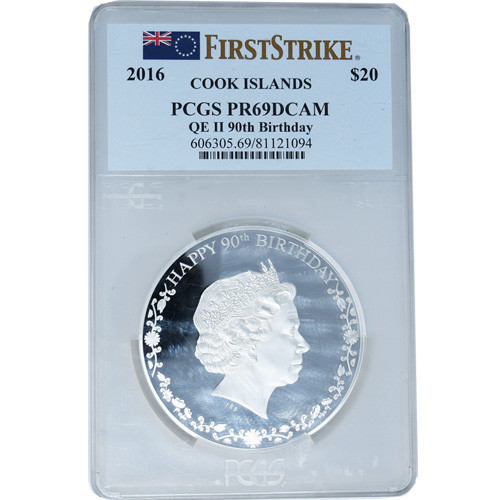 Bring the Queen of England herself to your coin collection with this stunning item that commemorated her birthday. The 2016 3 oz Silver Cook Islands Queen Elizabeth II 90th Birthday Coin offers unique details like a double effigy of Her Majesty and frosted devices for extra crisp details.

This 2016 Silver Cook Island Queen Elizabeth II 90th Birthday Coin is a gorgeous collector’s specimen. It receives a PR69 grade from PCGS, and because we want to ensure that near-perfect condition is protected while the coin is on the way to you, we ship it in a protective plastic slab.

This unique birthday design includes the queen’s effigy on both the obverse and reverse sides. The obverse side features a traditional look for legal coin tender. The queen’s portrait is centered and is surrounded by the appropriate inscriptions, including one that spells out the $20 dollar (CID) face value. One difference between this silver collector’s coin and standard coins is that the devices are frosted and the fields are mirrored, contributing to the details of the visuals.

Those details are especially stunning on the reverse. The same effigy of the queen, originally designed by Ian-Rank Broadley for use on coins starting in 1998, is given more detail on the reverse. It’s surrounded by floral elements that act as a wreath along the border. Above, the florals give way for the message Happy 90th Birthday.

After taking over its own legal tender from New Zealand in the late 20th century, the Cook Islands created a name for itself among coin enthusiasts. It doesn’t have its own mint, so it contracts with other mints to produce coins for its own legal tender as well as collector editions that provide a form of revenue for the islands.

The 2016 3 oz Silver Cook Islands Queen Elizabeth II 90th Birthday Coin is one of those coins that’s highly sought after by collectors across the globe. Buy yours today at Silver.com by placing an online order or calling 1-888-989-7223 for assistance. You can also connect with a rep via chat during business hours or via email.