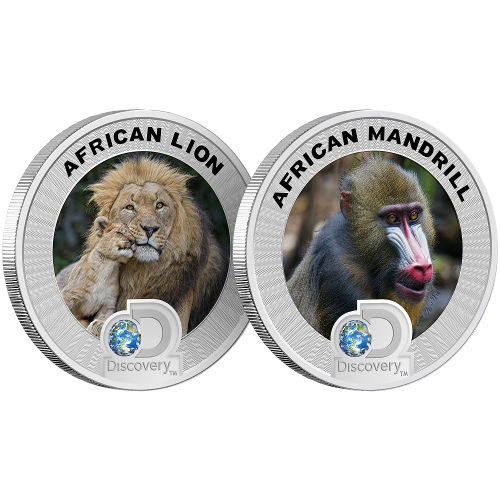 On every continent around the world there are animal species that are endanger of going extinct. The world has lost many unique animal species, and today changes in climate and the encroachment of mankind into animal territory threatens countless more. The Discovery Channel now brings its cause of conservation to life on the 2016 1.5 oz Silver Niue Endangered Species of the World Coin Set, available on Silver.com in BU condition.

As the first release in the Endangered Species of the World Series, the African Lion and African Mandrill shine a light on the threats facing native species in Africa. The lion has long been targeted as a matter of sport, with poachers hunting the animals for their pelts or leading foreign hunters on expeditions that have depleted the animal’s population.

The African Mandrill is so popular in world history that even the great evolutionary scientist Charles Darwin took note, saying “no other member in the whole class of mammals is colored in so extraordinary a manner as the adult male mandrill.” The mandrill has a blue and red snout, with a golden/red beard that is unmistakable in the wild.

Each Endangered Species of the World Set includes two coins, and will eventually feature new releases for each of the seven continents on planet Earth. The coins individually contain 1.5 Troy ounces of .999 fine silver and represent animals threatened with extinction on different continents. The BU condition of these coins indicates a lack of wear and tear, but the presence of minor flaws such as breaks in the luster, spotted surfaces, or contact marks.

On the obverse of each coin is the image of Queen Elizabeth II, captured in right-profile relief and set over a background of planet Earth, which itself is captured in its full glory with brilliant hues of natural colors.

If you have any questions, please don’t hesitate to contact Silver.com at 888-989-7223, chat with us live online, or connect with us via email.