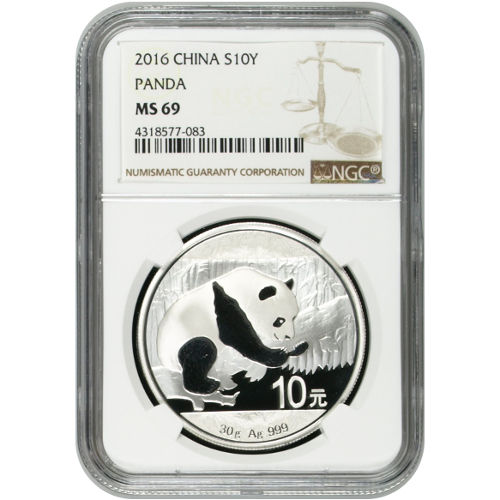 One of the most popular and longest running coin series in the world is the Silver Chinese Panda. The official bullion coin of the People’s Republic of China, these coins have gained increasing attention from numismatists around the world in recent years as China’s economy opens up more and more to the rest of the world. Today, the 2016 30 Gram Silver Chinese Panda is available on Silver.com in near-perfect condition.

The Giant Panda is one of the most unique and captivating animal species in the world. Considered an unofficial emblem of the People’s Republic of China, the panda is found in the mountainous regions of China’s western and central areas.

Silver Chinese Panda coins have been around since 1982, but the program has gone through changes over time. From 1982 to 1985, the coins were available only in proof. No coins were struck in 1986, and the coins returned as a 1/2 oz bullion and proof coins in 1987, with more bullion weights available since 1988.

Each 2016 Silver Chinese Panda coin in this product listing is a near-perfect specimen. According to the NGC, coins with an MS69 grade have their full, original luster, and also include a maximum of two minor detracting flaws.

On the obverse is the latest Giant Panda design, which depicts the creature reaching for some bamboo as it climbs along a fallen tree trunk. The only engraving is the face value of the coin.