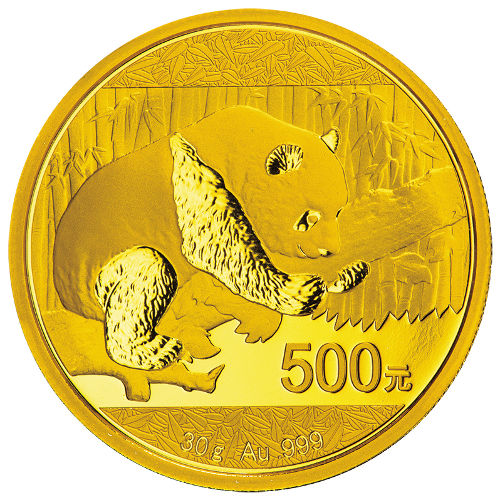 The Chinese Panda is one of the increasingly popular, and easily recognizable, bullion coin programs in the world. Produced in both silver and gold on an annual basis, the program famously changes the Giant Panda design featured on its obverse face each year. For 2016, more changes are coming for the program. Right now, the 2016 30 Gram Gold Chinese Panda Coin is available on Silver.com.

Chinese Gold Panda coins were originally unveiled in 1982 as a gold bullion coin. The coins were initially available in four weights, the traditional 1 oz, ½ oz, ¼ oz, and 1/10 oz varieties. In 1983 the Chinese Mint added a 1/20 oz coin, and phased in larger 5 oz and 12 oz options over time. Silver Chinese Panda coins were also added to the program in 1983, but took longer to catch on.

Like much of the world outside of the United States, the metric system is the chosen mathematical system for weights and measurements. China has made the decision effective with the 2016 Gold Chinese Panda to measure and weigh its coins in grams, rather than ounces, to fall in line with the metric system in use in the country.

The all-new 2016 30 Gram Gold Chinese Panda coin features the latest giant panda design on the obverse face. The panda, although not an official symbol of the People’s Republic of China, is a beloved national icon and is located primarily in the rugged mountains of the nation’s interior regions.

On the reverse you’ll find the Temple of Heaven. Opened in south-central Beijing over one thousand years ago, it has served as a place of worship and sacrifice for emperors since its founding.

The Gold Chinese Panda is struck under the authorization of the People’s Bank of China by the Chinese Mint. Coins produced by the Chinese Mint do not bear mint marks, making it difficult to identify the origins of individual coins.

Please direct your questions to a Silver.com associate at 888-989-7223. We’re also available online using our live chat and email features.