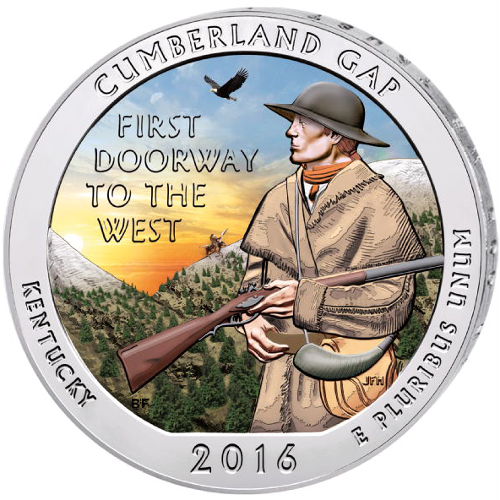 The America the Beautiful coin series from the United States Mint is currently one of its most popular annual offerings. Inspired by the designs and popularity of the state quarters program that swept the nation on its circulation quarters at the end of the 20th century, the ATB coins are collectible 5 ounce products representing each of the states. Right now, the 2016 5 oz ATB Colorized Silver Cumberland Gap National Historical Park Coin is available on Silver.com.

On the obverse of the 2016 5 oz ATB Colorized Silver Cumberland Gap National Historical Park coin you’ll find the image of a frontiersman looking out over the Cumberland Gap, holding his long rifle in hand as he ponders a future in the unexplored American West. Engravings represent the national park, state, and year of issue.

The reverse side of every ATB Silver Coin bears the imagery found on circulation US quarters. The left-profile portrait of President George Washington is the same as the nation’s quarter, and was designed in 1932 by John Flanagan to replace the famed Standing Liberty Quarter. Flanagan’s portrait of Washington is based upon a 1786 bust by William Cousins.

Cumberland Gap National Historical Park is located in the state of Kentucky, and was the original gateway to the west for thousands of Americans. The Cumberland Gap is a natural break in the Appalachian Mountains that run along the Eastern seaboard, and was used by Native American tribes and migrating animals for centuries. More than 300,000 American settlers are estimated to have traversed the Cumberland Gap to head west between 1775 and 1810.

Each of the 2016 5 oz ATB Colorized Silver Cumberland Gap National Historical Park coins in this product listing has brilliant, natural hues and colorization added to the obverse design. This helps bring the coin to life and make it unique.

The United States Mint does not colorize any of its products. These ATB Colorized Silver coins were modified by a private, authorized dealer. Hamburg Emporium is one of many private precious metal dealers that colorizes coins.

If you have any questions, please don’t hesitate to ask. Silver.com associates are available at 888-989-7223, or you can connect with us online using our live chat and email.