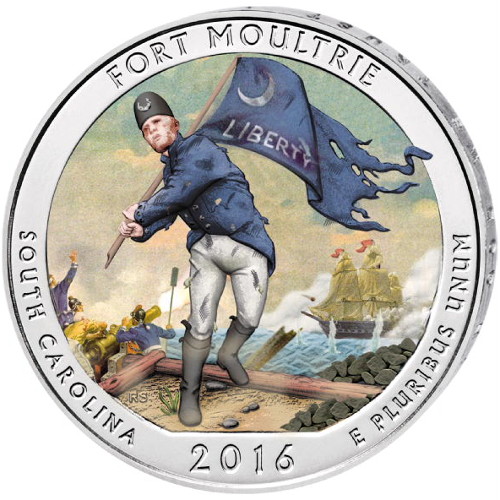 The America the Beautiful series of silver coins includes five design releases each year, with a total of 56 coins planned in the series to represent each of the 50 US states, the five overseas territories of the nation, and the District of Columbia. Scheduled to run through 2021, the program could be extended to 2033. Today, the 2016 5 oz Colorized Silver ATB Fort Moultrie Coin is available to you online at Silver.com.

Fort Moultrie is part of the Fort Sumter complex of naval defenses along the American Eastern Seaboard, built in the mid-1700s ahead of the nation’s Revolutionary War to protect the city of Charleston, South Carolina.

During the battle, the fort constructed of palmetto wood resisted the canon shot of British Naval ships, sending many of the balls bouncing off its flexible, yet strong sides. The British were not able to blast the South Carolina militia into submission, and the Americans were able to fight off British ground forces as well.

All 2016 5 oz Colorized Silver ATB Fort Moultrie Coins in this collection are in BU condition. Coins in this condition have no signs of wear and tear, though you may notice minor flaws ranging from breaks in the luster and spotted surfaces to contact marks from the production process at the mint.

The 2016 5 oz Colorized Silver ATB Fort Moultrie Coins listed here today have beautiful colorization added to the coin’s reverse field. These natural hues and tones help bring the design features of the coin to life, immersing you fully in the events depicted on the coin’s design field.

On the reverse side of the 2016 5 oz Colorized Silver ATB Fort Moultrie coin is the image of South Carolina’s own Sergeant William Jasper replacing the regimental flag on the ramparts during the British attack.

The obverse design is the same shared by all ATB coins and circulation quarters in the United States. President George Washington’s left-profile portrait is included on this side along with engravings that include “United States of America,” “In God We Trust,” and “Liberty.”

Each of these coins has after-purchase colorization added by Emporium Hamburg, and not the United States Mint. The US Mint does not colorize any of its products in-house for sale to the public or authorized dealers.

Please direct your questions to Silver.com customer service at 888-989-7223, chat with us live online, or simply send us an email.