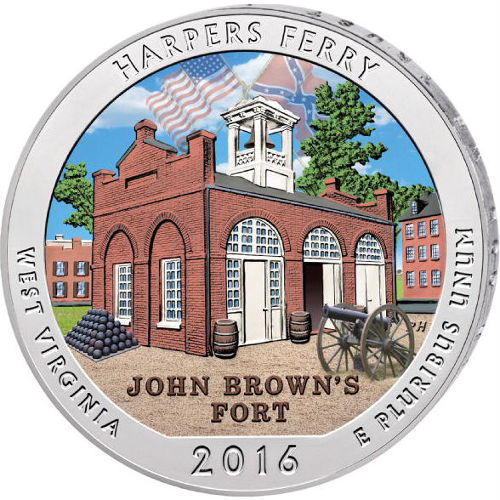 America the Beautiful is one of the nation’s most popular silver bullion coin programs. Launched in 2010, the series features five new designs each issue year representing a different state or territory in the United States. The 2016 5 oz Colorized Silver ATB Harper’s Ferry National Historical Park Coin is available today on Silver.com.

The ATB Series launched in 2010 with plans to represent each of the 50 US states and five territories, plus the District of Columbia. Each coin will feature a design highlighting a national park, forest, or other historical site in the representative state in the issue. The program is set to run through at least 2021, but can be extended to 2033 by the authority of the Secretary of Treasury.

In the 2016 5 oz Colorized Silver ATB Harper’s Ferry National Historical Park release, the ATB Series looks at the historical significance of Harper’s Ferry in the state of West Virginia. The peninsula is situated at the confluence of the Potomac and Shenandoah Rivers, and formerly served as an armory for the US Army and the site of pre-Civil War tensions between John Brown and US Marines.

Each of these 2016 5 oz Colorized Silver ATB Harper’s Ferry National Historical Park coins features brilliant colorization on the reverse design. Natural hues and tones are added to the coin’s design to bring the image of John Brown’s Fort to life on the coin’s reverse face.

The reverse of the coin features the image of John Brown’s Fort. Formerly the fire station at Harper’s Ferry, John Brown and fellow abolitionists in a raid to capture the federal armory. Brown and his remaining supporters held up in the fire station building against an assault from US Marines led by then-US Army Colonel Robert E. Lee.

On the obverse of the 2016 5 oz Colorized Silver ATB Harper’s Ferry National Historical Park coin is the image of President George Washington, captured in brilliant left-profile relief in 1932 by John Flanagan for the American circulation quarter.

The United States Mint does not colorize any of its coins during production. Any US coins with colorization from the ATB Series were finished by Emporium Hamburg, a third-party authorized coin dealer in Germany.

If you have questions, please don’t hesitate to ask. Silver.com associates are available at 888-989-7223, online using our live web chat, and via our email address. Check out our other 2016 America the Beautiful Coins.