America the Beautiful commemorative coins from the United States Mint roll into the 2016 production year with five new designs released to the public. The second coin in the series for 2016 features the Cumberland Gap National Historical Park in the state of Kentucky. Today, you can collect your own 2016 5 oz Cumberland Gap National Historical Park ATB Silver Coin from Silver.com.

Situated along a large natural break in the Appalachian Mountains, the Cumberland Gap encompasses 20,508 acres of land at the border of Kentucky, Tennessee, and Virginia. The region was first used by Native Americans as a thoroughfare and game trail as many species of migratory animals moved through the region from north to south with the changing seasons.

In early American history, the region was a critical passageway for settlers moving west from the eastern colonies in search of greater freedom and new land to explore. The St. Louis Gateway Arch is often referred to as the Gateway to the West, but the Cumberland Gap was the nation’s first true open path west.

On the reverse side of each 2016 5 oz Cumberland Gap National Historical Park Coin is the image of a frontiersman, long rifle in hand, gazing out over the Cumberland Gap. Engravings feature the name of the state represented, the park highlighted, and the phrase “E Pluribus Unum.”

The obverse side features the familiar image of President George Washington found on circulation American quarters. Designed in 1932 by John Flanagan, the left-profile portrait of the nation’s first president was inspired by a bust of Washington completed in 1786 by William Cousins.

America the Beautiful silver coins are produced in bullion and proof by the United States Mint. The Philadelphia Mint and Denver Mint contribute to the majority of production, though some special-edition coins are struck at the San Francisco Mint, as well.

If you have questions about this all-new coin, please contact Silver.com. Our associates are available at 888-989-7223, online using our live chat feature, or via email. If you are interested in similar products, be sure to check out our full selection of Silver Coins. 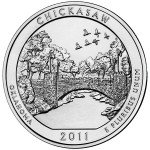 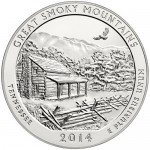