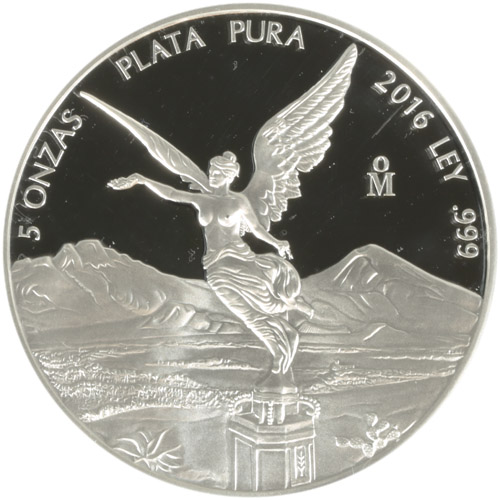 The Proof Silver Mexican Libertad Coins were introduced in 1983 by the Mexican Mint, one year following the introduction of the investment-grade version in the series. The collection was available for one year followed by a two-year hiatus in 1983 and 1985. Since 1986, the Mexican Mint has issued the Proof Silver Libertads in every year with 2012 being the only exception.

All 2016 5 oz Proof Silver Mexican Libertad Coins in this product listing are available to you with a protective capsule. These Proof Silver Libertad Coins are available with frosted design elements and a mirrored background field. The total mintage for 2016 was 2,750 coins. Though it seems low, it is actually the second-highest mintage for the 5 oz Proof Silver Libertads in the program’s history with the exception of the 5,000 coins struck in 2009, 2018, and 2019.

On the obverse side of all of the 2016 5 oz Proof Silver Mexican Libertad Coins is the image of Winged Victory. This depiction of Winged Victory is the same as the statue found atop the Mexican Independence Victory Column located in the heart of Mexico City. The column and statue were erected in 1921 to mark the 100th anniversary of the nation’s freedom from Spanish colonial control.

The reverse face of 2016 Proof Silver Mexican Libertad Coins features the modern coat of arms for Mexico. The seal includes the golden eagle of Mexico on a cactus branch as it battles a serpent with its talons and beak. Around the design field, you’ll find 10 different historic versions of the seal that Mexico has used throughout its independent history.

Located in Mexico City, the Mexican Mint is controlled by the federal government of Mexico and overseen in operations by Banco de Mexico. The mint is the oldest in the Western Hemisphere and was opened in 1535 by Spanish conquistadors.