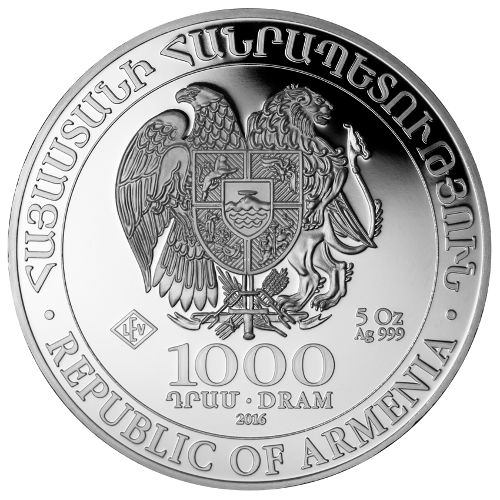 The Silver Armenian Noah’s Ark Coin is one of the fastest growing coin series in terms of popularity on the European continent. Though it still has a long way to go on the global stage, more than two million of these coins have been sold in just five years. Now, the 2016 5 oz Silver Armenian Noah’s Ark Coin is available on Silver.com for purchase by investors and collectors.

Silver Armenian Noah’s Ark coins were introduced in 2011, making the 2016 edition of the coins the 5th anniversary striking. However, the 2011 production year included only a 1 oz. coin and two fractional-weight coins (¼ oz and ½ oz). These 5 oz Silver Armenian Noah’s Ark coins were not introduced until 2012, along with a 10 oz and 1 Kilogram coin.

Noah’s Ark coins are produced following similar design motifs used at other sovereign and private mints around the globe. The Silver Armenian Noah’s Ark coin bears the same images on the reverse and obverse faces each year.

On the reverse of the 2016 5 oz Silver Armenian Noah’s Ark coin is the representation of the biblical tale from the book of Genesis. The only inscriptions read “Noah’s Ark” in both English and Armenian. The ark is featured in the middle ground, with Mount Ararat in the background and a dove bearing an olive branch in the foreground.

The obverse bears the coat of arms for Armenia. Included in the imagery of the coat of arms is Mount Ararat, while inscriptions around this side include the weight, metal content, purity, and face value of the coin, a mint mark, and the words “Republic of Armenia” in both English and Armenian.

Geiger Edelmetalle is one of Germany’s oldest operating mints, having opened its doors for silver production in 1218. It is located in the Saxony region of South East Germany.

If you have questions, please don’t hesitate to reach out to Silver.com associates at 888-989-7223. We’re also available through our website’s live chat feature and via email. If you are interested in similar products, be sure to check out our selection of Silver Armenian Coins.