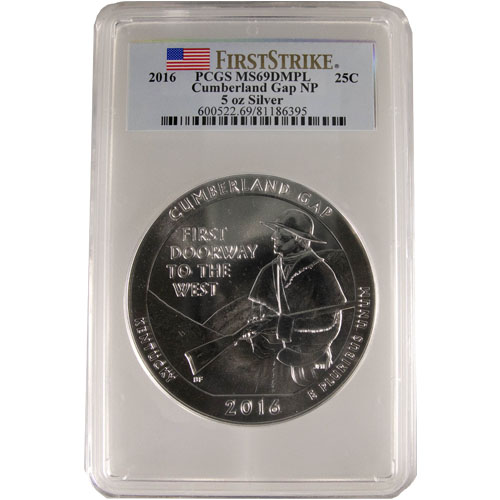 One of America’s most majestic landscapes is the Cumberland Gap, a passage through the Appalachian Mountains in Kentucky known for its rugged natural beauty and abundant wildlife. From prehistory through the settlement of the American West and into its modern incarnation as a national park, the Gap has been a natural highway and a major attraction. It’s one of the iconic landmarks celebrated by the U.S. Mint’s America the Beautiful Quarters series, including the 2016 5 oz Silver ATB Cumberland Gap National Historic Park Coin.

Prized by both investors and collectors, the 2016 5 oz ATB Cumberland Gap National Historic Park Coin makes an excellent gift for special occasions or the aspiring numismatist in your life. Each coin comes in its own protective plastic slab with a Mint State 69 grade. Coins in this condition exhibit full, original mint luster and no more than two minor flaws. Those flaws are limited to minuscule contact marks or hairlines and limited in scope to the areas outside the primary focal points. DMPL visuals are those that include deeply-mirrored fields and proof-like design elements.

The 2016 Silver ATB Cumberland Gap National Historic Park Coin is part of the America the Beautiful Quarters series that began in 2010, with limited mintages in each year since. It was Kentucky’s turn in early 2016, showcasing the Cumberland Gap as a gateway to the West for buffalo, Native Americans, explorers, and settlers alike. The coin features gorgeous artwork by the U.S. Mint’s Chief Engraver, Joseph Menna.

On the obverse side, you’ll find a classic profile portrait of President George Washington, an image first designed in 1932 based on a firsthand sculpture from the late 18th century that has become familiar on the everyday American quarter over the past 80 years. It features the inscriptions “UNITED STATES OF AMERICA,” “LIBERTY,” “IN GOD WE TRUST” and “QUARTER DOLLAR.”

The reverse side features an evocative portrait of a pioneer looking out over the Gap’s beautiful countryside beside the inscription “FIRST DOORWAY TO THE WEST.” Around the edges, it carries the inscriptions “CUMBERLAND GAP,” “KENTUCKY,” “2016” and “E PLURIBUS UNUM.”

Silver.com is always happy to answer questions about these silver bullion coins. You can reach us by phone at 888-989-7223, by live online chat, or by e-mail.