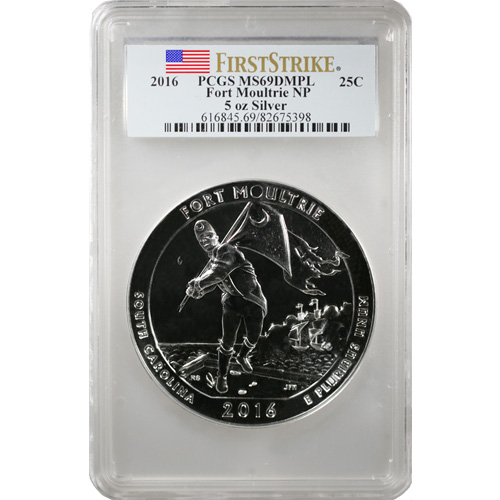 Fort Moultrie was the site of one of the most important battles in American history. The Battle of Sullivan’s Island occurred at Fort Moultrie as the plucky militia of South Carolina held off the mighty Royal Army and Royal Navy while defending Charleston from the onslaught of the British. Right now, 2016 5 oz Silver ATB Fort Moultrie Coins are available to purchase online at Silver.com in near-perfect condition.

Fort Moultrie was the sight of the Battle of Sullivan’s Island. This battle occurred during the first British attempt to seize Charleston, South Carolina. The American militia delivered a devastating blow to the British Royal Army and Royal Navy. While the Americans had no naval vessels, just 31 cannons, and 435 soldiers in the fort, they lost only 12 killed and 25 wounded during the battle. On the other hand, the British suffered 220 killed and wounded, four naval vessels severely damaged, two frigates moderately damaged, and one frigate grounded and later scuttled.

The obverse side of the 2016 Silver ATB Fort Moultrie Coins comes with a depiction of President George Washington. The first Commander-in-Chief of the American military and first President of the United States of America, President Washington has graced the US quarter since 1932 when his effigy was placed on the coin to honor the 200th anniversary of Washington’s birth.

On the reverse field of 2016 5 oz Silver ATB Fort Moultrie Coins is an image of William Jasper. A member of the South Carolina militia, Jasper ran into the thick of the fight during the Battle of Sullivan’s Island to retrieve his regimental colors and replace them back atop the ramparts for the British to see.

If you have any questions when you buy silver, we’re here to help. Silver.com customer service is available at 888-989-7223, online through our live chat, and via our email address.