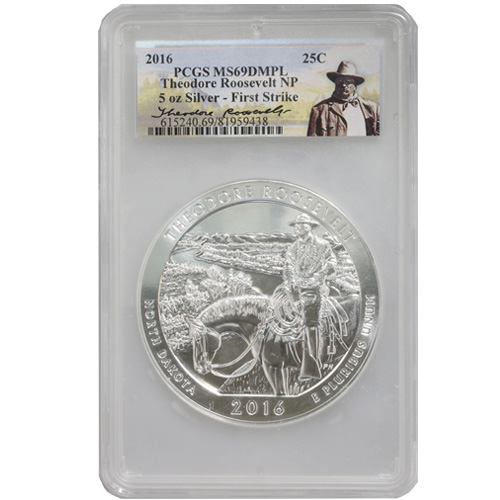 Silver ATB bullion coins from the United States Mint are massive commemorative quarters with 5 Troy ounces of pure silver content. The series offers 56 designs in total released between 2010 and 2021. Each coin released in the series represents a different US state, territory, or federal district and comes with its own distinctive design. Today, 2016 5 oz Silver ATB Theodore Roosevelt National Park Coins in near-perfect condition are available to you online at Silver.com.

President Theodore Roosevelt was a leading figure in 20th century America, not just as a President of the United States, but also as a conservationist. He was highly outspoken on the need to preserve America’s natural outdoor spaces for future use. For his efforts, a national park in the state of North Dakota was named in his honor and remains the only unit of the National Park Service named for a single individual.

All of the 2016 5 oz Silver ATB Theodore Roosevelt National Park Coins available here are in Mint State 69 condition. Known as near-perfect coins, each one has full, original mint luster and no more than two minor detracting flaws. Acceptable flaws at this level include only minuscule contact marks or hairlines that must be found outside the primary focal points of the coin.

Each of these 5 oz Silver ATB Coins also comes with two additional labels. The First Strike label means each one was received for grading within 30 days of its original release from the US Mint. DMPL designations stand for deeply-mirrored, proof-like. This refers to the presence of proof design elements on a BU coin, such as slight mirroring to the background and light frosting on the design.

President George Washington features on the obverse of the 2016 5 oz Silver ATB Theodore Roosevelt National Park Coins. This is the same design that has been on the US circulation quarter since 1932 and was designed by John Flanagan.

Please don’t hesitate to reach out to Silver.com if you have any questions about silver for sale. You can call us on the phone at 888-989-7223, chat with us live online, or simply send us an email with your inquiries.