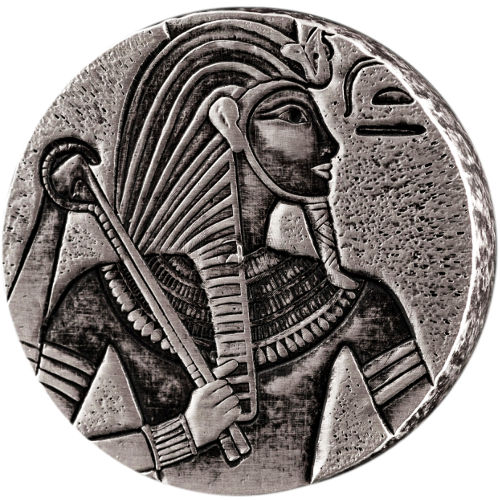 Designs may be slightly off center to make it appear like an Egyptian relic.

After a brief rule that lasted for only nine years, King Tut faded into the history of the Ancient Egyptian Empire and was largely lost to human civilization. Lost, that is, until his tomb was discovered fully intact by British archaeologist Howard Carter in 1922. Today, Silver.com offers the 2016 5 oz Silver Republic of Chad Egyptian Relic Series King Tut Coin in BU condition.

Tut served as the 12th pharaoh in Egypt’s 18th dynasty. Coming to power as a 10-year-old boy, much of his rule was overseen by advisors. He was married at a young age to another teenager, and is believed to have fathered two children who were still born.

King Tut ruled Egypt for just 9 years, dying at the age of 19 and becoming little more than a footnote in the history of the Egyptian Empire. Following the discovery of his tomb and intact, solid gold coffin in 1922, King Tut became the most famous of Ancient Egypt’s pharaohs. Though some believed he was murdered on the throne, his death was actually believed to be the result of an infection following a broken leg.

On the reverse side of the 2016 5 oz Silver Republic of Chad Egyptian Relic Series King Tut Coins is the image of the nation’s coat of arms, which includes the heraldic crest with a lion on the right and a goat on the left. Engravings on this face include “Republique du Tchad,” “5 Troy Oz.,” “3000 Francs CFA,” “2016,” and “.999 Fine Silver.”

The obverse of all the Silver Republic of Chad King Tut Coins features a right-profile portrait of the Boy King of Egypt. There are no text engravings on this face of the coin, but the incuse design and rough finish are further enhanced with a rimless design that adds to the ancient appeal of the coins.

Please don’t hesitate to reach out to Silver.com if you have any questions regarding these stunning new coins. If you have questions, contact our customer service team at 888-989-7223, connect with us online using our live chat, or send us an email.