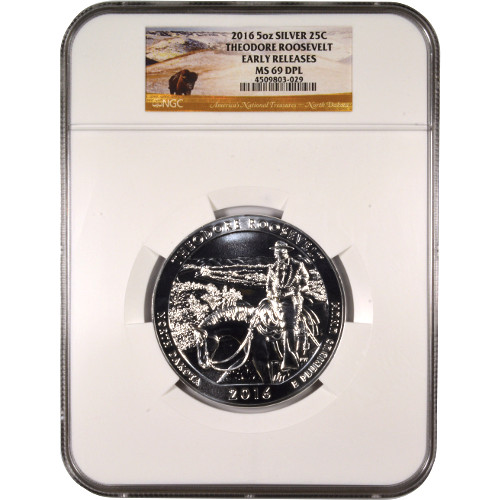 Theodore Roosevelt was one of the nation’s most important presidents, leading a boom in America’s global profile with the increase in and departure of his Great White Fleet on a worldwide sailing. He was also known as a staunch conservationist, and land in North Dakota bears his name today as a result. The 2016 5 oz Silver ATB Theodore Roosevelt National Park Coin is available today at Silver.com.

Roosevelt was perhaps one of America’s most active presidents, traveling the world as a big game hunter and gaining an appreciation of the wild environments of the world. One of his favorite places to go was the state of North Dakota. Here, Roosevelt not only hunted wild game such as bison, but also built himself a ranch.

On the reverse of the 2016 5 oz Silver ATB Theodore Roosevelt National Park Coin you’ll find the image of Roosevelt on horseback as he looks out over the Little Missouri River in North Dakota, surveying the lands in front of him.

Each 2016 5 oz Silver ATB Theodore Roosevelt National Park coin in this listing from Silver.com has a near-perfect MS69 grade from the NGC. Coins in this condition still have full, original mint luster, but also feature a maximum of two minor detracting flaws on the coin’s surface.

Deeply-mirrored, proof-like coins have proof qualities despite their bullion striking. This is highlighted by the proof, matte-like finish of the background fields and the presence of some deeply-mirrored visuals on the design sets.

We encourage all Silver.com shoppers to reach out to us with questions. You can contact our customer service team at 888-989-7223, online through our live web chat, and via our email address.