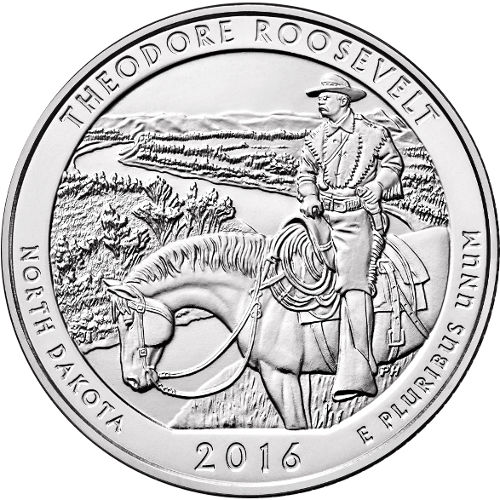 Please be aware that these coins ship in the exact condition as we receive them from the US Mint and it is normal for America the Beautiful coins to ship with minor blemishes, including scratch marks and general wear. We do not cherry-pick any coins for grading or purchase any second-hand material, so you can be sure the coins you receive will be in the exact condition that we receive them and ship in mint-sealed tubes of 10 or monster boxes of 100.

Theodore Roosevelt was one of the most adventurous Americans to ever serve as President of the United States. An avid hunter and military veteran, Roosevelt is remembered for his love of America’s wide open spaces and was a tireless champion for the national park system. The state of North Dakota is represented on the America the Beautiful series with the 2016 5 oz Theodore Roosevelt National Park ATB Silver Coin, available now on Silver.com.

President Theodore Roosevelt first set foot in North Dakota in 1883 on a bison hunt. He immediately fell in love with the rugged nature of the state’s Badlands, and was captivated by the American West. Over the next decade he would establish a cabin and separate ranch in the state that would become a second home to him.

Theodore Roosevelt National Park is one of the more unique in the US National Park system, consisting of three separate entities within the state. The park consists of a North and South Unit, with the former located 80 miles north of the latter, and a third unit at Elkhorn Ranch, which is located roughly in between the two.

On the reverse side of the 2016 5 oz Theodore Roosevelt National Park ATB Silver coin is the image of the old Rough Rider himself, Teddy Roosevelt, on horseback as he surveys the North Dakota Badlands. Inscriptions include “North Dakota,” “Theodore Roosevelt,” “E Pluribus Unum,” and “2016.”

The obverse features John Flanagan’s 1932 portrait of President George Washington. A fixture of American quarters for more than 80 years now, the portrait is a refined version of an original 1786 bust of the president by sculptor William Cousins.

The United States Mint produces the America the Beautiful Silver Coins at its Philadelphia Mint and Denver Mint facilities. The former had a brand-new coining press installed in 2010 for the series.

If you have questions, a Silver.com associate is waiting to answer them. You can reach us at 888-989-7223, online using our live chat, or by submitting your questions via email. If you are interested in similar products, be sure to check out our full selection of Silver Coins.