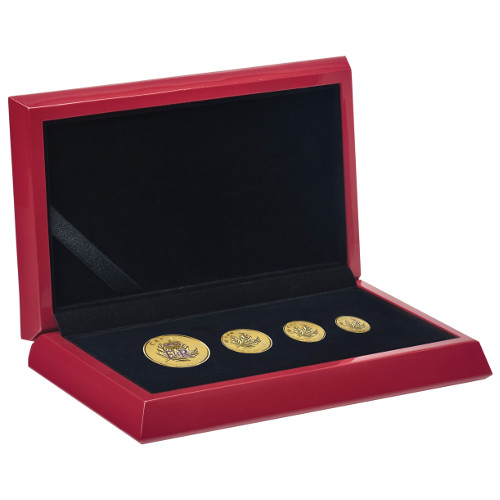 Gold Canadian Maple Leaf coins were the first coins other than the South African Krugerrand offered as gold bullion investment products for private purchasers. The economic boycott of South Africa, due to its apartheid system, led to a ban on the import of Krugerrands in many other countries. The Gold Canadian Maple Leaf filled that void and has grown in importance over the decades.

The coins in this unique 2016 Gold Canadian Maple Leaf Fractional Reverse Proof 4-Coin set include a reverse proof finish, which lends a deeply-mirrored appearance to the design sets and a strong, frosted visualization for the background field.

Each coin in the 2016 Gold Canadian Maple Leaf Fractional Reverse Proof 4-coin set features a different right-profile portrait of Queen Elizabeth II. Since her coronation in 1953, the Queen’s effigy has been routinely updated on the obverse of Canadian coinage to reflect her age. Today, she is the longest reigning monarch in the world and the longest reigning ever in British history.

The obverse of all coins in the 2016 Gold Canadian Maple Leaf Fractional Reverse Proof 4-Coin set include a different right-profile portrait of the Queen. The 1 oz coin has the youngest effigy of the Queen ever used on Canadian coinage, while the smallest coin features a more recent image, though it is not the 2003 design of Susanna Blunt.

The Royal Canadian Mint was founded in the federal capital of Ottawa in 1908. The mint was founded to give Canada independent control over its coinage from the Royal Mint of London, and to expedite the refinement of gold from the Yukon Territories.