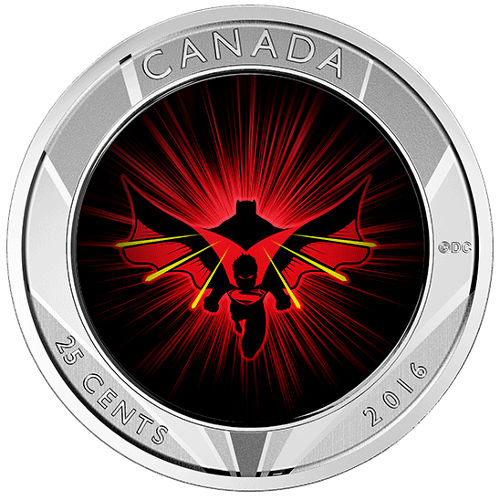 This coin’s unique lenticular design feature enables the engravers of the Royal Canadian Mint and the artists at DC Comics to put two logos on the same face of the coin. The concept of Batman and Superman being “two sides of the same coin” has never been truer than it is today.

As you shift the coin’s lenticular design set, you’ll notice a seamless shift from the image of Superman flying, with bursts of his iconic red, to the image of Batman and his silhouette. The shift also changes the colors from red to all black.

On the reverse face of the coin is the lenticular design, featuring both Superman and Batman on the same face of the coin. Engravings around the outside of the design field include “Canada,” “25 Cents,” and “2016.”

The obverse bears the right-profile portrait of Queen Elizabeth II. Crafted in 2003 by Susanna Blunt, her initials are included in Her Majesty’s portrait in the form of “SB.” Additional engravings include “Elizabeth II” and “D.G. Regina.”

Each of these 2016 Cupronickel Canadian Batman v. Superman coins features a combination of copper and nickel alloys in the manufacturing, with common cupronickel combinations including either 90/10 copper/nickel/iron or 70/30 copper/nickel/iron. Your coins arrive in a custom presentation folder, and include a Batman v. Superman card, as well as another card from the Dawn of Justice featuring either Batman, Superman, or Wonder Woman.

If you have questions, we encourage you to reach out to us. You can connect with a Silver.com associate on the phone at 888-989-7223, online using our live web chat, or via our email address.