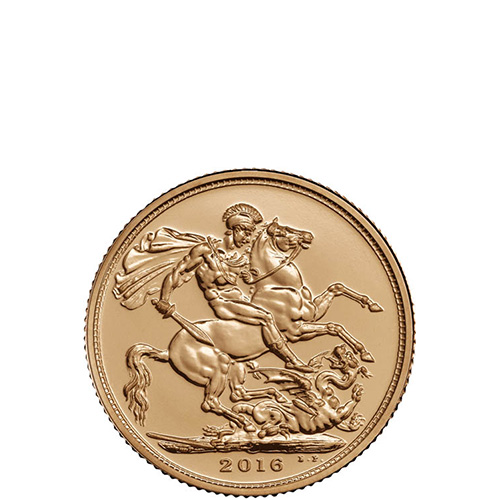 Any quantity available for $29.99 per coin over spot!

The Gold Sovereigns from the Royal Mint of England represent one of the longest-running gold coin programs still in production today. This vaunted series is rooted in the 1817 recoinage of gold currency in the United Kingdom that saw the concept of the English sovereign resurrected. From 1817 to 2016, these coins continue to be issued by the Royal Mint, with modern versions popular as gold bullion investments and not intended for circulation use. Today, 2016 Gold Great Britain Sovereigns are available to you online at Silver.com.

Following the defeat of Napoleon at the Battle of Waterloo, the United Kingdom could turn its attention to internal affairs. Among the issues it began to focus on was a recoinage effort. Gold currency was adjusted and the decision was made to introduce a new gold coin based on the 15th-century English sovereign. The new coin, known as the Great Britain Gold Sovereign, picked up on the use of monarch portraits on one side of the coin, while introducing a new reverse image of St. George slaying a dragon.

All of these 2016 Gold Great Britain Sovereigns come in Brilliant Uncirculated condition with plastic flips for shipping. Please keep in mind that BU coins have beautiful visuals, but that it is also possible and acceptable for coins in this condition to feature minor production flaws related to the coining process. Gold Sovereigns are 22-karat coins with 91.67% gold and a balance of copper.

On the obverse of 2016 Gold Sovereigns is an effigy of Queen Elizabeth II. This is the first issue of the new fifth-generation portrait of Jody Clark that was designed in July 2015 and debuted on British coins dated 2016. This right-profile relief shows the Queen at the age of 89 wearing the George IV State Diadem Crown.

The reverse field of 2016 Gold Great Britain Sovereigns continues the tradition of using the historic design from Benedetto Pistrucci. This visual shows St. George in right-profile relief as he rides in on horseback to slay a dragon with his spear. With a few exceptions, this image has featured on all Gold Sovereigns issued since 1817.

Please feel free to reach out to Silver.com about these gold coins for sale. You can call us at 888-989-7223, chat with us live online, or simply send us an email. 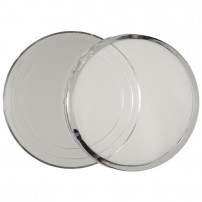 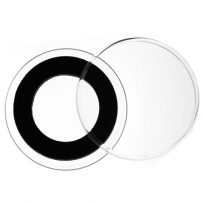